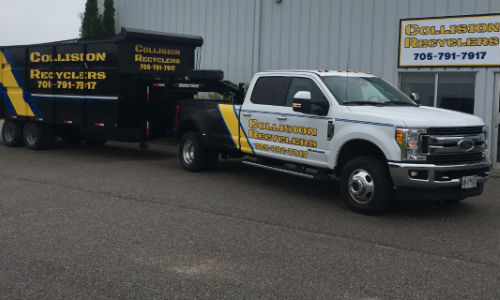 Barrie, Ontario — August 14, 2017 — Find a service people need that isn’t being provided, and you’ve found a recipe for success. Rick Meyer, founder of Collision Recyclers, may have found the right mix of ingredients.

Every professional repairer knows that certain parts on crashed vehicles are simply too damaged to repair, or that the OEM procedure calls for replacement in any case. The parts are replaced, but what happens to the old parts? The materials, such as metals and plastics, shouldn’t go in the local landfill. Recycling them is an option, but even large and busy shops are usually dealing with relatively small quantities of these materials. That means the return is so low that it likely costs more than the facility receives from the recycling company.

That’s where Meyer and Collision Recyclers come in. They come by the shop, pick up all the recyclable materials, and make sure they’re recycled in an environmentally safe manner. There’s absolutely no cost to the shop.

“People ask ‘how do you make money?’ We can turn a profit, since we’re dealing with large quantities gathered from different shops in the area where we operate,” he says. “Just take a look at some of the rubbers used in cars. They can be recycled at a profit, but only in very large quantities. We pick it up for free, but if the shops tried to do it themselves they wouldn’t have enough material to make a profit.”

It seems like a win-win situation. The shops clear out useless material that they can’t make a profit from and that’s taking up space in a storage room or out back, Collision Recyclers makes a profit, and valuable materials are kept out of the landfill.

It doesn’t even cost the facility much in the way of productive time. Meyer says they can clear out a typical facility’s recyclables in 45 minutes or less.

Collision Recyclers handles just about anything that comes out of a car except liquids. Steel, aluminum, tires, rims, rubber and plastic; they take it all. However, Meyer says one of their biggest successes is in dealing with plastic bumpers. Bumpers are obviously frequently damaged in collisions. While technology exists to repair plastic parts, sometimes the bumpers are simply too damaged. What can a facility do about this?

“Up until now, they either pile them up and eventually take them to the dump, or they just throw them in the dumpster,” says Meyer. “When we show up, they’re always in abundance.”

This has become such a large part of the business, in fact, that Collision Recyclers has recently invested in new technology to allow them to transport more bumpers at a time.

“Bumpers don’t weigh much, but they’re bulky and they don’t stack well,” says Meyer. “We put a mobile shredder in the back of our trailer and now we shred the plastic bumpers on site. It’s increased our capacity by about five times.”

“I’ve been in the recycling business for about 20 years, and in my experience most recycling operations specialize in either ferrous or non-ferrous metals, or in plastics. I think the collision centres were largely forgotten by these operations. I’m glad that we can offer them this service and can keep those materials out of the landfill,” says Meyer.