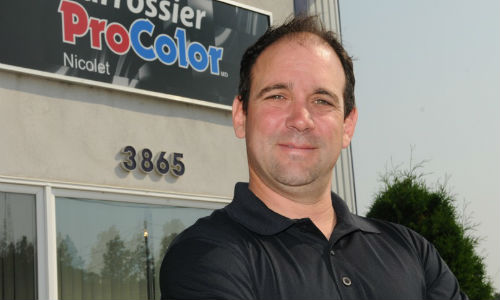 “We have developed a good relationship over the years,” confirms Mario Verret, Business Development Manager at Carrossier ProColor. “And now we were ready to work together officially.”

The collision repair facility was founded almost 40 years ago, in 1977, by Mathieu Raymond. His son, Patrick, has been working with him for over 25 years.

“My father is discrete, but he is still very present in the company,” says Patrick.

Even if the Raymond family’s collision centre has been renovated and expanded throughout the years, it has always been situated on Louis-Fréchette Boulevard in Nicolet.

“We are very attached to the region.” says Patrick. His father lives in Nicolet and Patrick lives in Bécancour.

Family spirit is what Patrick cites first among the reasons that motivated him to join the Carrossier ProColor banner. “We were drawn to the friendly atmosphere and solidarity that exists among Carrossier ProColor; it reminds us of our own team,” he says.

Patrick mentions many advantages that come with being part of the Carrossier ProColor network, including many services they offer, privileged relationships with insurance companies, effective support provided to their members and good visibility.
“Overall, Carrossier ProColor represented a business opportunity that we had to seize,” he says.

When asked about plans for the future, Patrick hints at several possibilities, including new investments and perhaps even the purchase of a new collision centre. He also foresees the integration of a new generation to the team.

“Even though nothing is sure yet, my son who is still in school is already showing an interest. To be continued!” says Patrick.

Carrossier ProColor Nicolet is located at 3865, Louis-Fréchette Boulevard in Nicolet.