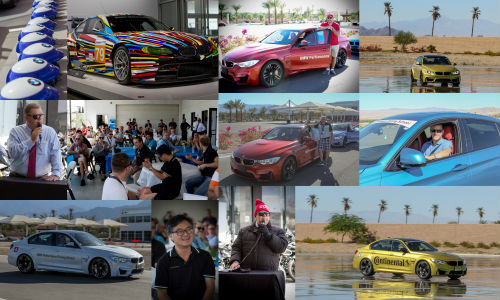 As a premium brand, BMW Group recognized early on the importance of an OEM-run certification program. Owners want to know their high-end vehicles are being repaired properly. BMW Group Canada started the CCRC program to satisfy that need. BMW Group Canada will have at least 43 certified shops in the program in Canada by the end of 2016. One or two people from each shop took part in the conference in the climatically-blessed Sonoran Desert resort town.

Peter Woo is the owner of Excellence Auto Collision. The organization runs two BMW Group-certified shops, one in Toronto, another in Concord, just north of the city. Their first shop (now relocated to Toronto’s east end) has been certified by BMW Group since the program began. Woo was the designated spokesperson for this event and recently discussed the meeting in an interview with Collision Repair magazine.

“It was a good event. We talked about where the CCRCs will be in the next few years. We talked about how we can expand the CCRCs in terms of coverage,” says Woo. Another new aspect to the evolving program will be a consumer satisfaction survey.

As part of the drive to maintain the high-end brand image BMW Group Canada is going to ensure that the certification program is running correctly not only from the repair quality standpoint but also from the consumer experience perspective.

“They want to start tracking consumer satisfaction index,” says Woo. “That’s going to be something new.”

Woo also noted that the company is putting a large emphasis on training.

“That’s the precedent they want to set. They want us to have a lot of training. This is what differentiates us from a normal body shop. If we’re going to be classified as a specialist, you’ve got to have the training,” says Woo. “And this is all OE-based training. This is not independent. This is right from the manufacturer.”

Woo got his start in the industry at Sonic Automobiles, where he met Josef Stebler. The two started a small shop in 1986 and ended up with a pair of shops with 50,000 sq. ft. of floor space. Three years ago Stebler retired, leaving Woo as the sole owner. BMW Group certification is key to attracting the owners of high-end imports that represent the shop’s clientele.

Woo went on to talk about some of the other topics discussed at the meeting, including some strategic moves that BMW Group will make in Canada in the year to come. “In certain areas in Canada they want more shops. There’s one being built in Edmonton and another in Waterloo,” says Woo.

This makes sense. A premium brand like BMW Group wants to be in the growing, upscale markets of the country. Edmonton has held on economically as the rest of Alberta suffers through a downturn. There are still lots of solid energy jobs in the city. The provincial government is sited there and so there is a building boom going on in downtown Edmonton. Michel Matte, BMW Group Canada’s National Manager of Aftersales Business Development and Marketing also adds “that there was a fundamental capacity issue in Edmonton that needed to be addressed. Hence the need for an additional shop. We are currently re-assessing all markets accordingly in this regard.”

As for Waterloo, that region continues to develop as a respected source of premium tech talent. The University of Waterloo is one of the top sources in North America for computer engineers and some now consider the Waterloo-Toronto “Super Tech Corridor” second only to Silicon Valley in the US in terms of talent. So no wonder BMW Group Canada wants to be expand their CCRC presence further in these two regions.

Another attendee at the meeting was Matthew Bannister, the owner of Titanium Tools & Equipment. His business is located in Concord, Ontario. Titanium supplies autobody repair equipment to BMW Group CCRCs across the country. “For me, it’s good to go to these meetings. It’s nice to touch base with customers. I wouldn’t normally see many of these people in person as we ship equipment to clients right across the country. There’s that nice social aspect to it,” he says.

Bannister said BMW Group Canada personnel also talked a bit about new vehicles headed to the showroom floor. The group also took in a presentation on the auditing process that BMW Group CCRCs must go through. As the BMW Group certification program has evolved, a third-party company has been brought in to carry out any audits on the shops. Relying on an outside group to carry out the audit is a good way to validate the veracity of the procedure to all involved. And while the changes to the program ensure that the BMW Group certification procedure is the gold standard in the industry, it does change the focus of the overall program according to Bannister. “Now it’s not so much about getting the right tools, now it’s about the auditing,” he says. “There was a lot of safety and audit talk.”

Attendees to the conference also took in a showroom of products. There were some social events. The group also toured an award winning CCRC location in Pasadena that is the number one-ranked centre in all of North America for two years running (2015, 2016).

“That was really impressive,” says Bannister. “That was a really sophisticated shop. We got to talk to the techs. They had various cars taken apart and took us through some of the processes. It was very impressive. They even had a lunch there for us on the shop floor. They really took care of us. It was great.”

Balancing the work were some fun events organized by the BMW Group Canada team. “They were very gracious,” says Woo. One such event was a trip to the Petersen Automotive Museum in Los Angeles. Robert Petersen, the publisher of Motor Trend magazine, built the collection. The group had a guided tour. “It was amazing. Just all these iconic cars. Special Porsches. Iconic BMWs. Rare metal Buggatis fron the 1930s.” There was also a BMW Art Car display as well. “What was so cool about that is that it was really interesting to hear about the role early BMWs played in the history of the auto industry,” says Woo.

There was also a trip to the BMW Performance Centre in nearby Thermal, California.  This location is the second such facility in the US (the other being in Spartanburg, South Carolina) and opened in late January 2016. There members of the group took part in a series of on-course exercises. A fleet of fully-optioned BMW M3s, M4s, M5s and M6s worked four challenges—a drag race with brake box stop, two-car chase on a skid pad, timed event and a hot lap behind a professional driver. Throw in a great dinner after and an opportunity to commemorate the late Sam Piercey with the inaugural Sam Piercey Memorial Award, “…and it was a fantastic time,” says Woo. The benefits of being in the OEM certification program.

As cars become more complex bumpers are being filled with sensors and cameras. The price of repairs is rising rapidly. This increase in the cost and complexity in repairs is leading to new talk around the industry about OEM-run certification programs, even in the case of domestic manufacturers.
Earlier this year Collision Repair magazine reported on comments made by John Eck, Manager, Wholesale Dealer Channel for General Motors Customer Care & Aftersales, who said his company has been researching what a certification program might look like, and was even quoted as saying that the company “… may have something to announce,” relatively soon. Other private organizations are emerging to offer OEM-based certification among groups of manufacturers. More recently, Sean Carey, Principal of SCG Management Consultants, speculated that insurers will be less involved in collision repair facilities and OEMs will become more influential as technology and the complexity of cars increases. We suspect we’ll see even more OEM certification programs before very long.

PrevPreviousBMW Conference 2016
NextFriday Fun: ABRA has a new CEO, composites have strong potential and Telsa may have a new rivalNext