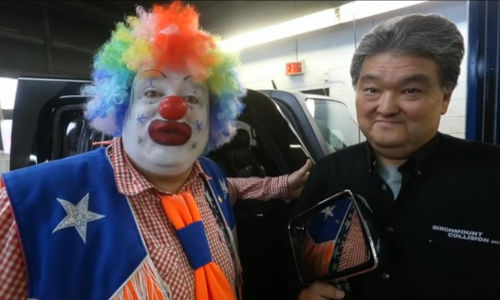 Toronto, Ontario — December 7, 2015 — It’s one of the funniest stories to hit the news recently, but also one of the most harrowing. Last week a mentally ill man began attacking cars and pedestrians in downtown Toronto. One of the pedestrians under attack was whisked to safety in a most entertaining way—a Hummer full of clowns pulled up beside the woman and offered her an escape.

The woman later expressed gratitude to the clowns for getting her out of harm’s way. But before the clown car could make its escape’ the assailant ripped a mirror off the truck.

The story was soon picked up by national and global news outlets. Wayne Hosaki, the owner of Birchmount Collision, in Scarborough, watched the footage throughout the day. He couldn’t help but feel for the driver of the Hummer, hero clown Doo doo.

Hosaki reached out to Doo doo through Facebook and offered to help. “We saw the whole story on television that afternoon … the maniac terrorizing people on the street. Doo doo the clown pulling up, taking the woman to safety, the assailant tearing the mirror off. It’s kind of cool a clown would do that,” said Hosaki in an interview with Collision Repair magazine. “I’d rather jump in a Hummer full of clowns than deal with this guy assaulting people on the street.”

Thinking the situation through, Hosaki realized he was in a position to help. As the owner of a collision repair shop he could fix the mirror. “After seeing it on the news I thought, ‘This guy’s a hero….and he’s going to need his mirror fixed.’ I reached out on Facebook and I said, ‘I saw what you did on the news. I want to fix your mirror free of cost.’,” said Hosaki. “I didn’t know what it cost. I didn’t know whether I could get new or used. But we committed. We got the order. And we were ready to fix the mirror later that afternoon.”

Before he arrived with the truck, Doo doo called a local news station and told them what Hosaki was going to do for him. The station said they wanted to send a news crew. Everyone rolled up to Hosaki’s shop, cameras in tow. “I had no idea it was going to blow up like that,” says Hosaki. The Toronto Sun newspaper also did a story. The story of the fixing of the mirror of Doo doo’s Hummer itself became a story. “Our social media is blowing up. People from all over are getting on and saying, ‘How great this is … at this time of the season.’ I never expected it. All I wanted to do was to do something for this guy who did for someone. You know, pay it forward. But now the story has gone world wide. It’s international. It’s crazy. It’s social media.”

Hosaki’s daughter and son-in-law live in Hawaii. They saw it there and sent a message. “It’s just gone crazy,” says Hosaki. “The likes on the FB page and the number of new followers we have … we’ve been trying to break a thousand for years. We broke 1,000 on Saturday,” he says. “I just thought it was something that needed to be done. But total strangers have been getting a hold of us through Facebook and our regular email account and saying, ‘Hey, nice job. Way to go.’ It’s nice.”