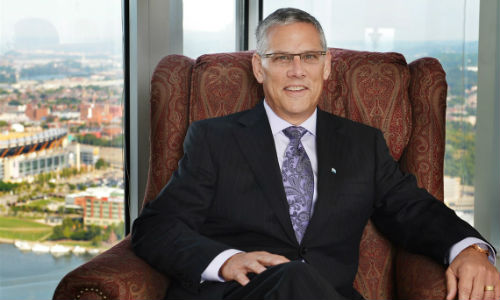 Toronto, Ontario — April 3, 2017 — This week’s Tuesday Ticker brings you the latest updates on PPG’s attempted takeover of AkzoNobel, how AutoCanada’s stock took a tumble recently, why Tesla became more highly valued than Ford, and much, much more!

– The attempt by PPG to take over Dutch paint maker Akzo Nobel continues to play out. The chairman of the board of AkzoNobel, Antony Bergmans, gave an interview to a newspaper in the Netherlands. According to Bergmans, PPG’s proposal is “just a poor offer” that “fundamentally undervalues our company and, what’s more, doesn’t address any of our other concerns.”

Akzo shares are trading at about 77.73 euros, well below the more than 90 euros a share that PPG is offering. That the shares are trading at such a significant discount to the bid price suggests investors don’t think the deal with go through. Some analysts encourage shareholders to take the offer, as it, “… is not realistic that Akzo can achieve a value of 90 euros per share as an independent company for many years, even after a carve-out of the chemicals business.”

Bergmans encouraged investors to sit tight and wait for the company’s plan to be unveiled on April 19. A report notes that, “Buechner (AkzoNobel’s CEO – Ed.) maintains his plan to sell chemical operations to focus on coatings and paint will create more value and carries fewer risks than PPG’s sweetened 88.72 euro-a-share offer it received March 20.”

The CEO of PPG, Michael McGarry, has said the company could make a hostile bid for Akzo now that the second bid has been rejected. At a recent press conference, McGarry said, “It was shocking that an enhanced proposal was turned down in basically a day.” The executive went on to say he has been “surprised and disappointed” that AkzoNobel hasn’t engaged in talks.

It is interesting to note that Lempres has so much experience in investments and private equity. Axalta has been named as a possible partner of AkzoNobel (if that company wanted to bulk up and create a global paint powerhouse rather than be absorbed by a company like PPG). Charlie Shaver, Axalta’s Chairman and CEO, was quoted as saying, “Liz’s global experience across a wide range of industrial and consumer sectors will bring exceptional insights to the Board. As Axalta continues to grow, Liz’s background in developing business strategies for client growth and execution will add to the Board’s ability to guide our path forward.”

An analyst published a report on Axalta last week, wondering if the company is taking on too much debt in its bid to growth through mergers and acquisitions. According to the analyst, “Axalta is rapidly buying into international markets including China, South America and soon to be India. Currently, the biggest issues with this stock are the accumulating debt … This is to be expected from a fast-growing company. However, even with the consistent financing that will reduce interest payments in the current period, Axalta’s interest coverage ratio is something to take into consideration when determining how much risk an investor will want to take on.”

– AutoCanada took a bit of a stumble last week on the stock market as the stalled western economy was reflected in a disappointing earnings report. Stock in AutoCanada (which operates several hundred collision repair bays throughout its chain of dealerships) took a 10 percent hit.

This week an analyst at a popular investment website wonders if that makes the stock a good buy right now. Shares are currently trading around $20.50 and “may be starting to look attractive.” AutoCanada is making a bid to consolidate Canada’s auto dealerships. The company pays a dividend of 10 cents a share, so there is a 2 percent yield on the stock as it is.

– Could Fenix finally be ready to turn the corner? A report on our US content partner, Repairer Driven News, notes that Fenix has managed to rework conditions related to its debt owed to Bank of Montreal (through its Harris subsidiary). Fenix is attempting to build a competitor to LKQ. But the company’s, “… failure to meet 2016 quarterly filing dates and other requirements from BMO Harris led to the recycler being … blocked from future borrowing under the $35 million credit line.” However on Monday BMO Harris “cut a deal” with Fenix that will see the company continue under better credit terms. According to the report “BMO Harris won’t take action on any of these or other ‘similar defaults’ through May 26 — ‘provided no other defaults occur,’ according to Fenix.” Could this be the beginning of a turnaround in the fortunes of Fenix, which has struggled financially since its IPO? Could be.

The NASDAQ stock exchange had threatened to delist the stock. But now Fenix “believes that it is now in compliance,” with stock exchange rules and will continue to be listed. “While we continue to face challenges due to our strained liquidity position … we are pleased to have reached a forbearance agreement with our bank lender and are optimistic that we will reach a positive outcome following the strategic alternative evaluation process,” said the CEO in a press release.

– A story in the Wall Street Journal notes that, “The auto finance sector has taken a bad turn.” According to the WSJ, Ally Financial, one of the biggest auto finance companies, said defaults on auto loans for low-credit borrowers are still increasing. According to one market analysis, “up to 40% of all auto debt in America today is ‘nonprime’ or worse … The more nonprime auto debt out there floating around, the higher the likelihood of defaults … That means more car repos … More repos cause massive used car inventory coming back onto lots … It also means lower prices for used cars.”

Shares in Hertz plunged 20 percent over the week. Hertz is the rental car agency with the biggest exposure to used car rates. Carl Icahn, the activist investory and sometime advisor to Donald Trump, doubled down on his stake in Hertz, increasing his position last week as the stock sold off.

“Hertz shares lost one fifth of their value last week, as a troubling reading for a used-vehicle price index was followed by warnings that lender Ally Financial and automaker Ford Motor Co. see more pain to come. Hertz is seen as being more exposed than rental-car rivals like Avis Budget Group Inc. to the price slump because its turnaround plans call for selling off an outsize number of aging cars and updating its vehicle fleet,” according to a report.

– The Takata recall has finally spread to Asia. Toyota annnounced it will, “recall 2.9 million vehicles in Japan, China, Oceania and other regions including its Corolla Axio and RAV4 due to potentially faulty airbag inflators … Fuji Heavy Industries, Mitsubishi and truck maker Hino Motors have also recalled around 240,000 vehicles in the domestic market over inflators made by Takata which can explode after prolonged exposure to hot conditions.

– Tesla has surprised many by delivering huge numbers of cars on time. The company shipped 25,000 units in the first quarter of the year. That saw the company’s share price surge by 5.7 percent. The price increase means that Tesla has an overall market capitalization (the value of all the shares outstanding) of $47.8 billion. Remarkably, that’s $2.6 billion more than Ford.

An analyst who follows the company, Ben Kallo, with Robert W. Baird & Co., was quoted in a story as saying, “I don’t know if people want electric cars, but people want Tesla. I’m not an Elon Musk worshiper, but people that would normally buy a Porsche are buying Teslas right now.”

Short sellers (investors who bet that a stock will fall over time) have targeted Tesla after the company struggled to deliver 80,000 cars for all of last year. Currently 29 percent of shares outstanding are shorted, according to data compiled by stock exchanges. Those investors will be feeling the pain after the sharp rise in the price of the stock last week. Many question how it is such a small company can be considered more valuable than Ford. Dave Sullivan, an analyst with AutoPacific Inc., was quoted as saying, “It’s mind-boggling that a company that has the global breadth and depth that Ford has is suddenly valued at less than or equal to Tesla. It does not compute.”

According to data from IHS Markit, Tesla sold 40,697 vehicles in the US last year. Ford delivers that many F-Series trucks about every three weeks.