TOP OF THEIR GAME

Meet your WorldSkills 2022 competitors for Collision Repair and Automotive Refinishing

More than 500 of the nation’s most talented young tradespeople were in Vancouver or tuned in at home over several days in late May for the return of the Skills Canada National Competition. This year’s partial return to usual event structure saw medals awarded across a mix of 35 live and virtual skilled trade competitions, including auto body repair and automotive refinishing, as well as other skill-based careers like hairstyling, photography, electronics and graphic design.

The in-person portion of the competition took over the Vancouver Convention Centre from May 26 to 27 and called on participants from across the experience levels of post-secondary and Team Canada qualifiers. The secondary school level of competition was held virtually and drew in more than 200 skilled youth to take part in 45 competitions. Collision Repair managed to get in touch with two gold medal winners, and working collision repair technicians, who will go on to represent Team Canada at the upcoming WorldSkills Competition 2022 Special Edition.

First up was Abigail King, a 20-year-old auto body repair student currently splitting her time between studies at Fanshawe College in London, Ontario. and work at a local TD auto insurance centre. 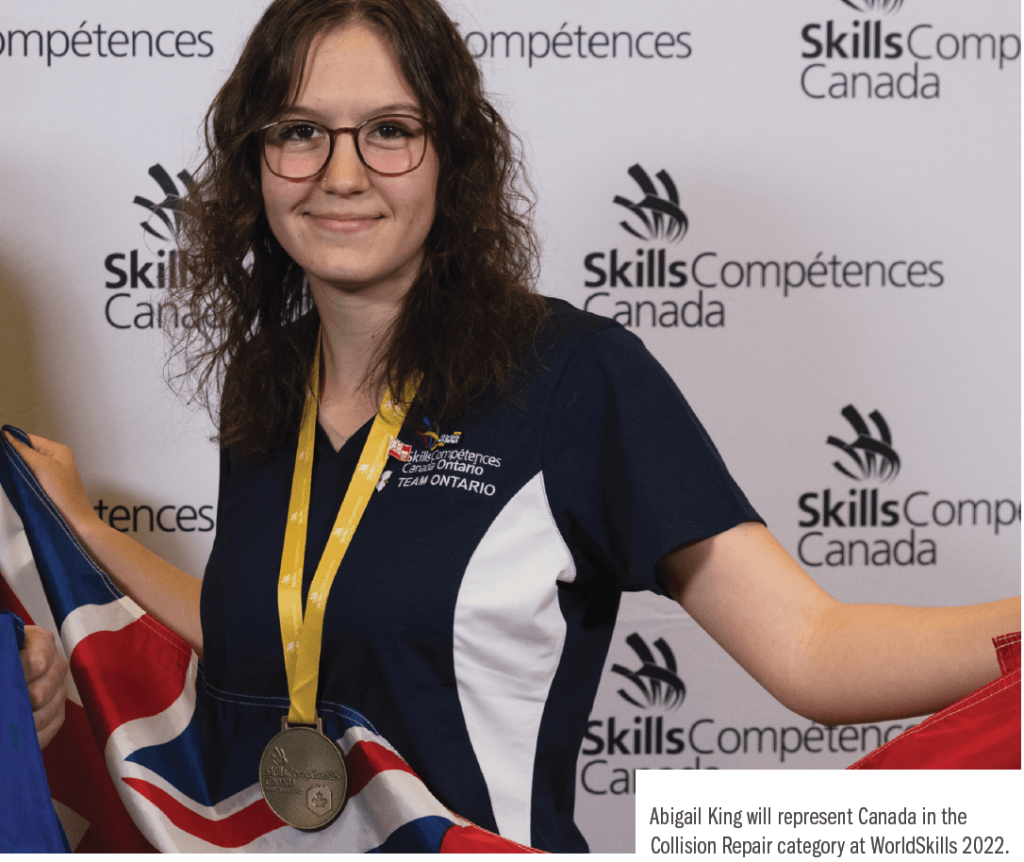 Collision Repair: In May, you competed at the Skills Canada National competition in Vancouver in the post-secondary auto body repair category. How did it go?

Abigail King: I placed first. It was great. I was competing against two other people, one from Alberta and another from Quebec. The first day I repaired a large aluminum dent on a fender, a small aluminum dent on a hood. Then I had to do a bumper repair that was about a two-inch cut. I also did some measuring; we used a tram gauge to measure the top and bottom points, and then we checked those points with the Car-o-Liner system. The second day I did a lower A-pillar replacement which went well.

CR: What made you interested in competing in Skills Canada?

AK: I was in the [auto body repair] techniques program at Fanshawe College. Usually they choose apprentices to compete, but they didn’t have enough this year, so they were keeping a close eye on all the students in the technique’s classroom, and I just so happened to be chosen. It was cool.

CR: Did you face any unexpected challenges at the competition?

AK: The A-pillar replacement. We never got around to doing that at school. I’ve only drilled out the spot welds at school, so I went into that completely blind. I had never looked at an OEM spec sheet, nothing like that.

Same with that small aluminum dent on the hood; we thought that I would have access to the underside to use a hammer and dolly, but they changed that, so we had to use the aluminum ProSpot system, which I have also never used before.

CR: How did you deal with using equipment you had never worked with before?

AK: It wasn’t as bad as you might think. The technical chairs went through it thoroughly with us on how to use everything.

They did one-on-one demonstrations and if you were using the equipment wrong, they would correct you.

CR: What are you ultimately hoping to get out of the experience of competing?

AK: I get kind of nervous when people watch me do my thing, so I’m hoping this will get me more used to that. It’s also a good networking experience to meet all these new people and seeing their techniques, because different places have different ways of doing things, so I think that will be neat to see. 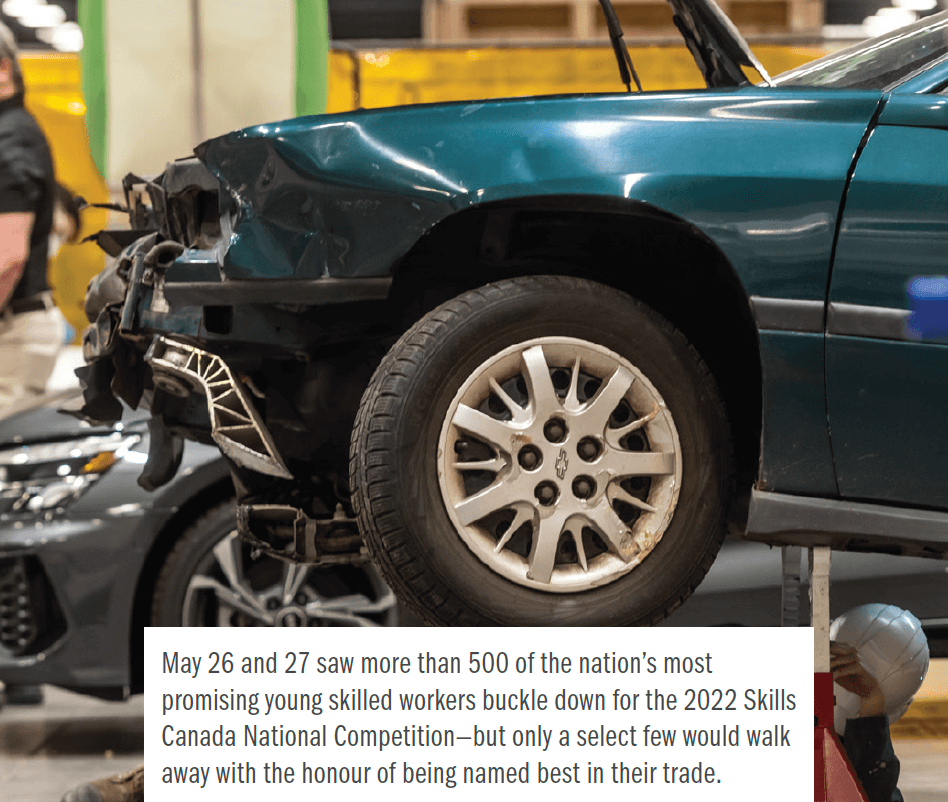 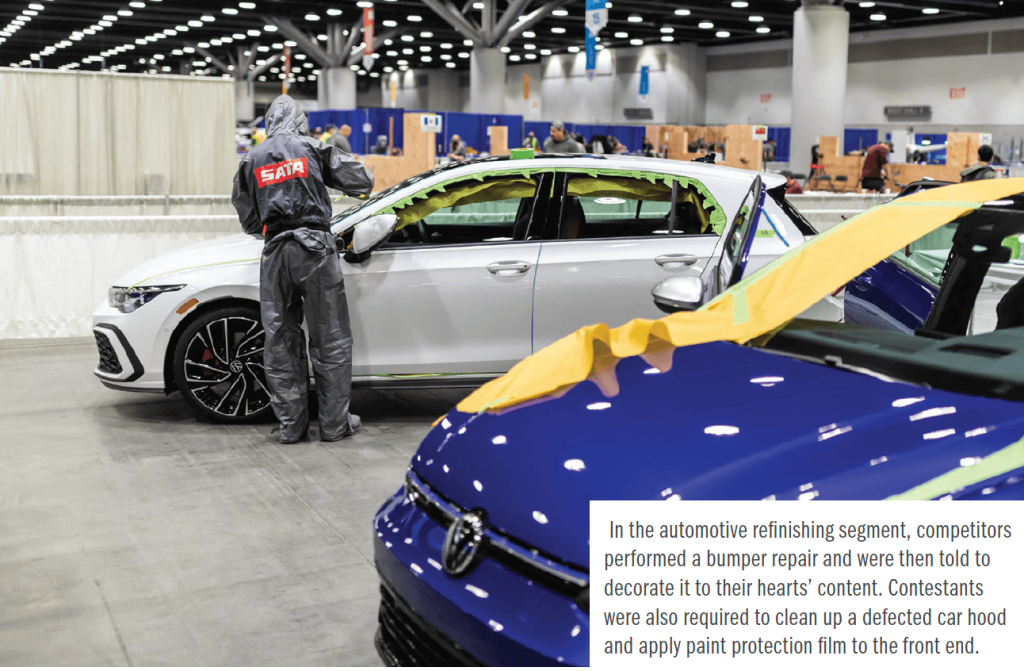 Next, we had a call with two-time gold medal-winning automotive refinisher, a past Bodyworx Professional cover star and current painter at Calgary’s CSN Black Ace, 22-year-old Dorien Lozeau. 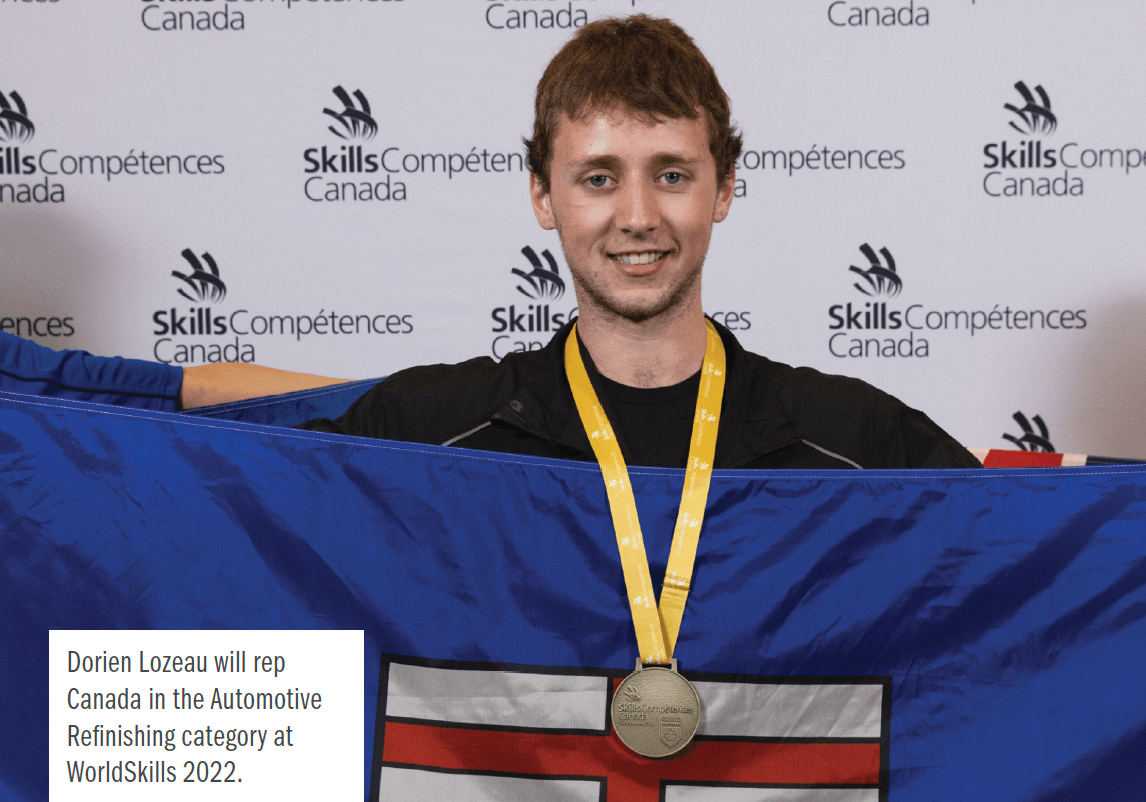 CR: You recently competed at this year’s Skills Canada National Competition where you won a gold medal in car painting and have since advanced to the WorldSkills Competition. Could you talk a little bit about how the Skills Canada competition went?

Dorien Lozeau: It went well this year, being back in person. Last year they had to do a virtual competition, so it was nice to get to go out to Vancouver for the nationals and meet a bunch of people. It was awesome.

CR: What was involved in your portion of the competition?

DL: In the auto painting category that I was in, we had to repair a plastic bumper and paint some custom graphics on it, all in limited time. We also had to remove some defects from a hood that was already painted. It was full of dust nibs and runs, so we had to remove the defects and cut and polish the hood, then apply some paint protection film to the front end. There was also a little bit of colour tinting and colour evaluation and stuff like that.

CR: How have your competitive successes been received at home and at CSN Black Ace?

DL: Nearly everywhere I went after I won someone would compliment me on it, so it was cool. There were signs all over town about it.

KEEP AN EYE OUT FOR COVERAGE OF HOW THESE TALENTED UPAND- COMERS DO ON THE WORLD STAGE THIS FALL. THE WORLDSKILLS COMPETITION 2022 SPECIAL EDITION IS SET TO TAKE PLACE, BOTH VIRTUALLY AND LIVE, ACROSS 15 COUNTRIES AND 65 COMPETITIONS, FROM SEPTEMBER 7 TO NOVEMBER 26.