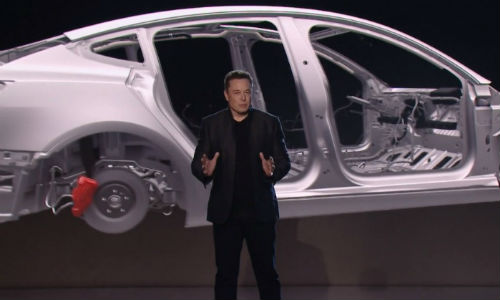 By Mike Davey
Hamilton, Ontario — April 25, 2017 — There’s change in the air for Tesla’s certified collision shops. It has been revealed that the car maker will replace its current in-house training with an online curriculum. In addition, Tesla has made arrangements with I-CAR to administer its welding qualifications.
The news comes after a statement made by Jon McNeill, President of Global Sales and Service for Tesla, that the company would expand its bodyshop network by 300 locations in North America and remove poor performers from its network.
Our US-based content partner, Repairer Driven News, has received an email that was sent to Tesla’s certified shops. In the email, the manufacturer lays out the reasons for the change: “Building on the past five years of experience, we have been able to evaluate and dramatically simplify training, and will no longer require instructor led, onsite training. We have developed online training as a more time and cost effective way to train your technicians to be approved for Tesla repairs.”
In the same email, Tesla cites its upcoming Model 3 as the reason for the switch to online training. The Model 3 will be the company’s first mass-market vehicle and sales are expected to be robust.
Collision Repair magazine has contacted Tesla several times recently for comments on how this will impact the Canadian repair network, but the calls had not been returned at the time of publication.
Tesla also noted in the email that it has approved eight “of the most popular aluminum welders” and is “exploring promising alternatives to other equipment for which we previously offered limited options.” The email also indicated that other improvements will expand estimating system offerings and reduce the cost and time involved in structural part replacement.
The network has suffered from slow repair times, and it seems likely that these changes are intended to close the gap. The issue came to widespread attention after a Tesla owner revealed that he had waited for nearly eight months for repairs to his vehicle. The story was originally reported on The Motley Fool, but was widely circulated.
The shop in question told the car’s owner that delays in parts availability were behind the long wait for the repair. Tesla, however, put the emphasis on the shop. Repairer Driven News spoke to two shop owners who are on Tesla’s certified program. Both spoke under condition of anonymity, and noted that Tesla still has some issues when it comes to supplying parts. According to the report on Repairer Driven News, one of these shop owners described Telsa’s parts distribution as “dysfunctional.”
Another report from Repairer Driven News also quotes from three anonymous shop owners in regards to the upcoming changes to the program. In general, they have concerns that online training and expanding the list of approved equipment will have negative impacts.
“This collision repair program may have had issues in the past, but quality and documented results were not one of them,” wrote one shop owner in an email to Repairer Driven News.
It’s been speculated that the Model 3 will use a mixed-material construction. While this may be cheaper to build than an all-aluminum vehicle, it’s not necessarily simpler to repair. One shop owner interviewed by Repairer Driven News noted that “When working with predominantly aluminum vehicles like the Model S and X, it’s ‘all one material,’” so a shop can protect against galvanic corrosion by working with it in a dedicated area. This would not be the case with a mixed-material vehicle.