BMW is partnering with BASF to develop the next generation of paints using an innovative new material—sewage waste. Euphemistically dubbed “sustainable paints made from bio-waste,” these matte paints are part of the company’s focus on sustainability and reduced CO2 emissions. Most importantly, these new paints are chemically identical to previously manufactured body coatings and share the same properties as their oil-based predecessors. BMW Group Plants Leipzig and Rosslyn (South Africa) are expected to use similar processes to create corrosion protection paints, effectively replacing petroleum-based components like naphtha with renewable alternatives. 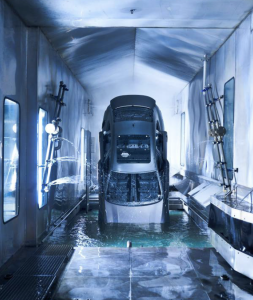 “By reducing our use of fossil raw materials, we can conserve natural resources and lower CO2 emissions at the same time,” says Joachim Post, a BMW board member. “Innovative paints based on renewable raw materials are an important step in this direction.”

Members of the collision repair industry know all too well the ordeal that achieving certifications can be—but considering what North York-based Inkas Armored Vehicle Manufacturing has to go through for their stamp of approval, OEMs should count their lucky stars they don’t have to prepare for grenade tests. The armoured vehicle developer released a video several weeks ago showing off the trials their modified Toyota Land Cruiser 300 had to endure to earn certification, including being subject to 780 rounds of various calibre bullets, six roof-level hand grenades, four underbody grenades, two land mines and 15 kg of TNT exploded just two metres away. The test dummies inside the SUV definitely got rattled around in the onslaught of bullets and explosions, as the tests were intended to target “the potential points of failure where the vehicle would be most susceptible to penetration during an attack.” When the data for measures like survivability and pressure came back, the Land Cruiser passed the test in full. 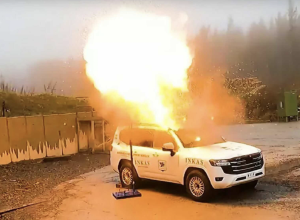 In addition to the seemingly miraculous armour plating, the SUV was equipped with a fire-suppression system, emergency lights and a siren/intercom system.

Advanced driver-assistance technology (ADAS) could be the key to keeping our older generation of Canadians safe on the road, according to a new report from the Insurance Institute for Highway Safety (IIHS). Via a recent study, the organization found that up to a third of crashes involving drivers 70 years of age or older could be prevented with the proper implementation of ADAS technology—specifically left-turn assist. The conclusions reached in the IIHS’s report are based on U.S. federal crash data from 2016 to 2019, which was used to compare the most common types of crashes older drivers get into to those of middle-aged drivers. From there, researchers worked to determine how many of those crashes could be addressed with one of five available ADAS functions, as well as two other pieces of experimental technology that track speed, location and route data. It was found that newer and less common “intersection-assistance features,” such as left-turn assist, would be effective in 32 percent of the crash scenarios older drivers find themselves in and would aid in the prevention of 38 percent of driver injuries and 31 percent of driver fatalities. Middle-aged drivers stand to benefit from ADAS as well, as the IIHS found the features to be potentially relevant to crashes involving more than 20 percent of that age group.

Shape-changing mirrors! A horror movie classic, coming to a car near you! A recent patent by General Motors (GM) describes a mirror that reshapes in accordance with the driver’s behaviour, with the ultimate goal of improving driver awareness. The patent describes a motorized housing around the mirror, turning it from a flat mirror into a fisheye mirror. Think of the extra field of view from rounded anti-theft mirrors in stores and you get the idea. Sensors adapt to information from the car automatically, says GM. Information like the vehicle’s turn signal status and lane merging would allow the mirror to transform accordingly without driver input. While no prototype has been showcased yet, the patent suggests that materials like silver and stainless steel would be used as a reflective surface. However, it does not elaborate on whether this alternative will be as clear as traditional glass mirrors.