Winnipeg, Manitoba — On Jan. 4, Boyd Group Services announced it had completed its CEO Succession Plan that was first announced in August 2019. Effective Jan. 2, 2020, former Boyd Group president and CEO Brock Bulbuck moved into an executive chair role, with Tim O’Day succeeding Bulbuck as president and CEO. Bulbuck remained in the […] 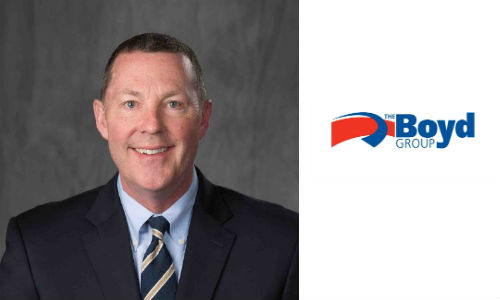 Winnipeg, Manitoba — January 4, 2017 — Boyd Group Income Fund has appointed Tim O’Day to the positions of President and Chief Operating Officer for the Fund. In his new role, O’Day will have operating responsibility for the entire company, including operations in both the United States and Canada. Concurrent with this change, Brock Bulbuck […]

The people behind Boyd: Consolidator elects Board of Trustees

Winnipeg, Manitoba — May 24, 2016 — Boyd Group has announced the results of the vote for the election of the Board of Trustees. The vote was conducted at the Annual Meeting held recently in Winnipeg. The Board of Trustees now consists of Dave Brown, Brock Bulbuck, Allan Davis, Gene Dunn, Robert Gross, Timothy O’Day […]

Winnipeg, Manitoba — April 28, 2015 Boyd Group Income Fund (TSX: BYD.UN) has announced the release date of its fiscal 2015 first quarter results. Set for May 12 before the markets open, the release will be followed by a conference call to review the financial results. Held by Management of the Fund, the call is […]