Survey: Majority of respondents believe a non-technical education is valuable 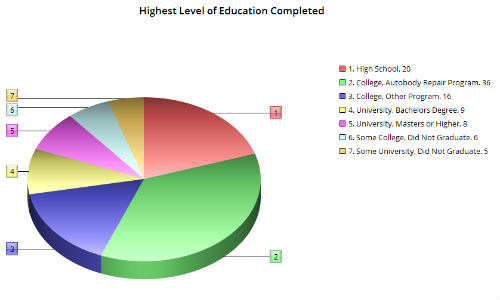 Hamilton, Ontario — July 11, 2017 — Collision repair is a business that demands continuous education, but much of this is through upgrade courses, or in some cases by learning on the job. Collision Repair magazine’s latest survey focused on the levels of formal education achieved by readers.

First, we asked respondents to let us know which level of education they had achieved, and in what area. As you might expect, the most common answer was “College, Autobody Repair Program” at 36 percent. The next most common response was “High School” at 20 percent. After that, “College, Other Program” takes the third spot at 16 percent. Judging from the anonymous comments left by these respondents, the “Other Program” was often business administration.

The next largest group were those who had taken college or university, but did not graduate, at a combined total of 11 percent. Looking at university grads, 9 percent of respondents posses a Bachelor’s Degree. It’s interesting to note that this is only slightly ahead of those possessing a Master’s Degree or higher at 8 percent. Now might be a good time to mention that these survey results reflect the readers who chose to respond to our survey, rather than the industry as a whole.

We also asked respondents to let us know what they had studied at college or university. As you might expect, answers skewed heavily towards business administration and accounting, but we also saw a few arts degrees, studies in psychology and even a professionally certified baker.

The surveyed repairers were then asked if they thought a non-technical education is valuable for a collision repair professional to have. It seems the majority thinks it is, with 58 percent simply answering “Yes” and an additional 33 percent saying it depends on the course of study. Just 9 percent of respondents gave us a flat “No” to this question.

Finally, we asked the surveyed repair professionals if they would go back to school and what they would study, assuming they could take the time off work and it was free.

Collision Repair magazine’s next survey looks at the most common types of collision damage in your shop. Please click here to participate in the survey and watch for the results next Wednesday on collisionrepairmag.com!