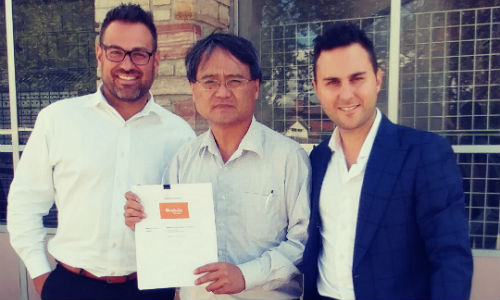 The new network launched only recently, but has already seen several additions to the organization. The founding shops previously operated as Prochilo Brothers Auto Collision, with a number of facilities in Toronto, Ontario. The first additions to the network were Simplicity Burlington and Simplicity Markham.

The new Simplicity Thornhill is located at 93 Glen Cameron Rd. Paul Prochilo is the Chief Executive Officer for Simplicity Car Care. He believes this partnership will add tremendous value to both organizations.

“Kirk and his team have carried a long standing reputation for delivering a tremendous client experience and are considered stewards of the community, through their active involvement in supporting local charities and the community overall,” says Prochilo. “There were obvious synergies between our companies which made this partnership an obvious fit.”

Kirk Lin outlined his reasons for joining the new network in an interview with Collision Repair magazine.

“Their strategy makes sense. A couple of companies had approached me before, but I wasn’t interested in joining,” he says. So what makes Simplicity different? “These guys are more aggressive and efficiency oriented, as well as focusing on the quality of repair. They’re bodyshop managers and bodymen. We’re on the same page.”

Lin background’s includes formal study in engineering at Lakehead University. He believes it is vital for managers to understand automotive technology, a viewpoint he shares with the executives at Simplicity Car Care.

“The shop owner or manager has to know something about the cars, or they’ll be left making excuses if the repair doesn’t go as planned. It’s not a good long-term way of doing business. You want to provide customer satisfaction and that starts with knowing cars. The guys at Simplicity understand this,” he says.

According to Domenic Ieraci, President of Simplicity Car Care, the overall goals of the network are to make car care simple and affordable, while also helping franchisees achieve their greatest potential.

“As a network, we also want to help insurers by providing simplified solutions for the auto claims ecosystem, and give our mutual customers a simplified, convenient and affordable experience,” he says.

Simplicity Car Care offers a complete car care solution. Collision is a core competency, but the members of the network also provide complementary services, such as mechanical, glass, detailing and tires. In short, a total car care package.