CSN Collision Centres has officially made their first moves into the Quebec collision repair market, as the nationwide collision banner welcomes CSN Martin of Quebec City into the fold.

CSN’s sales manager for Quebec, Charles Boivin, who was instrumental in bringing CSN Martin under the banner, says he is excited to kick off the company’s campaign in the province with the introduction of such an influential shop in the area.

“I am thrilled that CSN Martin is the first shop to join the network from Quebec; the people there are true professionals, they do very high-quality work, and it’s a family business. They fit in perfectly with CSN.” Boivin said.

CSN Martin first opened in Quebec City in 1952 by André Martin. With the help of his two sons, André-Philippe and François, the shop quickly became an institution in the community. Having once made the transition from mechanical to body repairs, CSN Martin’s adaptability is proven and the family is always looking toward the future for what will help them succeed.

CSN Martin was activated as an official CSN collision centre on February 1, 2021. 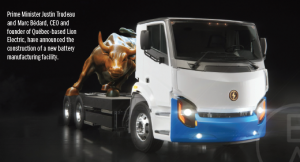 “With today’s announcement, we are continuing to take steps to support our Canadian businesses, invest in innovation, and protect the environment,” said Prime Minister Trudeau. “It is because of companies like Lion Electric that we are accelerating our transition to a resilient and competitive clean growth economy.”

The construction will start in the next few months at a location that will be determined in the near future and the factory is planned to begin production in late 2023. The factory will be producing battery packs and modules made from lithium-ion cells.

The project will cost approximately $185 million CAD by Lion Electric, which will benefit from $100 million CAD support from the federal and provincial governments. Lion Electric plans to power approximately 14,000 medium and heavy-duty vehicles annually. The factory plans to produce one battery module every 11 seconds and a full battery pack every five minutes.

The innovation center will focus on research and development on improving the capacity, performance and range of the batteries as well as other products.

Like the person who puts the tongs back on the plate at the buffet, Hyundai Canada is striving to make the EV industry better than when they arrived by partnering with Quebec-based Lithion Recycling to handle the automaker’s battery recycling program.

This move by Hyundai attempts to complete a more sustainable production cycle for the company’s batteries by allowing for the recovery of up to 95 percent of the battery’s components in the recycling process.

According to Lithion, after the batteries are recycled, they are reintegrated into the battery development process, thus providing a nearly fully-closed production loop. “This service agreement will validate an economic and innovative technology that considerably reduces the carbon footprint compared to incumbent technologies and mining.” said president and CEO of Lithion Recycling, Benoît Couture.

“This type of partnership paves the way to the collaborative business model of the future, enabling battery safe disposal and close loop recovery of critical minerals and metals used in lithium-ion battery, which are needed to decarbonize transportation.”