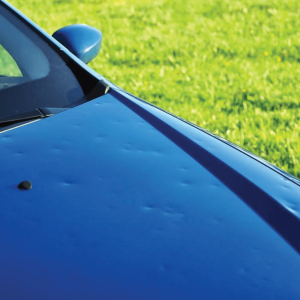 A hail-producing thunderstorm in Thompson, Manitoba earlier this month has created over 250 damage claims filed with Manitoba Public Insurance (MPI) The claims come from an August 8 storm that damaged hundreds of vehicles.

Hailstones from the storm were reported to have been as large as eggs, resulting in over 16-17 times as many repair claims as the nearest largest hail event in 2018.

“Since 2018, the corporation has not seen any hail events in the area that have exceeded 15 reported claims,” said MPI communications manager Kristy Rydz. Extra staff from the Crown insurer will be sent to the Thompson area later this month to help accommodate estimation and book appointments for those having filed claims.

However, due to a shortage of accredited repair shops in the area, many owners of vehicles damaged in the storm will have to make round trips to Winnipeg in order to get their vehicles fixed. MPI, however, will not be claiming responsibility for travel or accommodation costs for these trips, leaving car owners to foot the bill.

“We are not very pleased at all,” said Chelsea Dawn, vehicle owner affected by the storm damage. “[MPI] will not cover any of the expenses.”