NOT QUITE THE ROCKIES 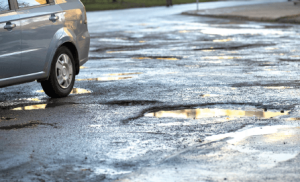 Buckle up, Manitoban drivers. It’s bumpy out there. In fact, roads in the province are so rutted that Manitoba Public Insurance says it witnessed a 479 percent increase in pothole-related claims this March, compared to March 2021.

The public insurer received 324 pothole-related claims in March 2022, compared to 56 in March of last year, according to statistics MPI shared with the CBC. The City of Winnipeg has repaired 23,000 potholes since the start of April, primarily focussing on major routes and bus routes, said a city spokesperson.

As hundreds of refugees fleeing war in Ukraine arrive in Canada by the planeload daily, Manitoba Public Insurance has announced that they are offering driver’s licence exchanges for newcomers in need of a lift.

As of Monday, Ukrainians will be able to exchange their Category B passenger vehicle licence for Manitoba full stage Class 5 licence without the need for any sort of road testing.

Licensed Ukrainian drivers arriving in Canada have a three-month grace period where they can use their existing licence before a Manitoba driver’s licence is required. All applications will be subject to review, according to MPI’s press release, and commercial class licences or motorcycle licences are not eligible for exchange.

MPI says the initiative was made possible by U.K.-led analysis into Ukraine’s driver education requirements and testing standards. As well, this decision makes Ukraine the fifteenth jurisdiction to hold a reciprocity or licence exchange arrangement with Manitoba, joining the likes of Japan and Australia, whose exchange agreements were finalized in 2021 and 2018, respectively.

MPI says that eligible individuals who have recently arrived in Manitoba and have already started the driver licensing/testing process should contact MPI’s Contact Centre at 204-985-7000 or toll-free at 1-800-665-2410 to discuss their options.