Insurance professionals get an inside view at Toyota event 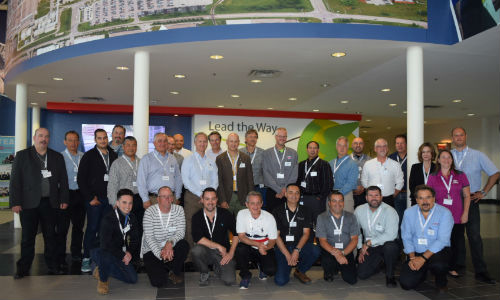 Cambridge, Ontario — June 22, 2017 — Scanning, calibration and strict adherence to OEM procedures are of extreme importance to modern collision repair processes, but the message is still making its way from the OEMs to the insurance industry. An event hosted by Toyota Canada at Toyota Motor Manufacturing Canada (TMMC) in Cambridge, Ontario helped to close the information gap.

“We need to start having those discussions with our insurance partners,” said Paul Stella, Collision Repair and Refinish Manager for Toyota Canada at a similar event held for repairers at Centennial College in late 2016. The nature of this event, and the large number of claims professionals in attendance, show that the discussions are well underway.
“The goal of this event was to help our insurance partners understand how we build vehicles, how they’re repaired with Toyota Recommended Repair Procedures and why scanning and calibration are so important in the collision repair process,” said Stella in a recent interview with Collision Repair magazine.
The insurers in attendance were treated to a presentation from Stella outlining the safety features included in modern Toyota and Lexus vehicles, such as blind spot monitors, lane keeping assist and other advanced driver assistance systems that Toyota calls “Toyota Safety Sense” or “Lexus Safety System+.”
Stella noted during his presentation that care needs to be taken during the collision repair process to ensure these systems are functioning as they did when they left the manufacturing plant.
Insurers also received a presentation from an Engineer from TMMC, who demonstrated this process during the manufacturing stage.
Warren Bennett is the Manager, Claims Commercial Partnerships, at Desjardins General Insurance Group, and one of the claims professionals who attended the event.

“Toyota was very forthcoming in trying to outline what some of those issues are, and they seem very dedicated to explaining the reasoning behind those OEM directives,” he said. “They also had one of their engineers speak about the OEM repair procedures and the reasoning behind them, in particular to do with scanning and ‘intelligent’ systems.”

“Even something as seemingly simple as disconnecting the battery means that a lot of systems need to be calibrated,” said Stella. “This is something that both insurers and repairers need to know.”

Stella also brought up another procedure that may seem simple, but can have detrimental effects if not done correctly.
“Replacing the windshield with a new one without calibrating the camera mounted to the windshield (if equipped) means the camera may not function as it was intended,” said Stella. These cameras are a vital piece of the car’s accident avoidance systems. An uncalibrated camera may give the driver a false or incorrect warning once the car is back on the road.
“We don’t build vehicles like we did ten years ago, and we don’t fix vehicles like we did ten years ago,” said Stella. “Collision repair centres need to research OEM repair procedures so they have the correct, current repair instructions and precautions on how to properly fix the vehicle.”
The event also included a tour of Toyota’s manufacturing plant in Cambridge, Ontario so insurers could see the vehicles being assembled in Canada by Canadians at Toyota’s award winning plant. For more information on tours of the plant, please visit tmmc.ca/en/plants/plant-tours.
A video from Toyota offers more details on Toyota Safety Sense. Other videos from the company look into particular features in more detail, such as this video on the company’s Pre-Collision System with Pedestrian Detection and this one on Lane Departure Alert. You can also see a demonstration of how to do a health check from Toyota USA at this link. 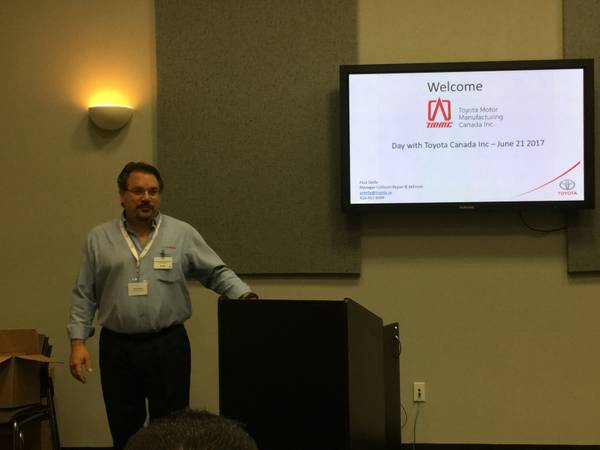 PrevPreviousCARSTAR Nine and Dine 2017
NextFriday Fun: Watch out for deer; the dirty secret behind EV batteriesNext