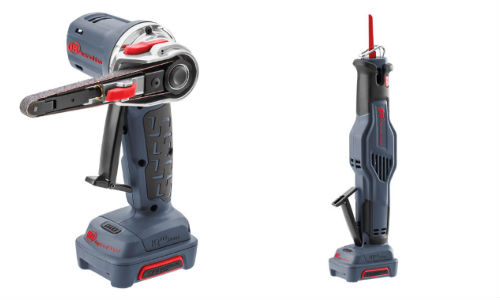 Davidson, North Carolina — April 3, 2017 — Ingersoll Rand has released the IQV12 Series Belt Sander and Reciprocating Saw. According to a statement from the company, the new power tools are designed to increase precision and accessibility to the toughest-to-reach places.

“The innovative and compact design of the Ingersoll Rand belt sander and reciprocating saw allow technicians to save time trying to get into tight spaces, which increases productivity and gets jobs done quickly,” said Eric Suro, Channel Marketing Meader at Ingersoll Rand Power Tools. “The tools are designed to be ergonomic, which decreases exhaustion during long, demanding jobs.”

The Ingersoll Rand IQV12 Series Belt Sander has a cordless, compact design with a 3/8-inch by 13-inch narrow-width belt and an eight-position adjustable belt arm to provide access to tight spaces. The tool removes spot welds, rust and surface deposits and can be used for sanding metal, plastic, fiberglass and glass surfaces.

Ingersoll Rand says its new IQV12 Series Reciprocating Saw provides reliable agility and precision when completing a repair while maximizing efficiency in the shop. The air-saw-inspired tool gives technicians the ability to make intricate “S”-shaped cuts. In addition, the reciprocating saw is lightweight and has an inline, low-profile design that allows more access to tight spaces.

The reciprocating saw is used in a number of applications in collision repair, such as paint and autobody work on parts like body panels, quarter panels and for bumper disassembly and disposal. The variable speed lever improves accuracy and adds control, while the adjustable guard enables technicians to use a longer blade for complex scrolling and circular cuts, or a shorter blade for precise, straight cuts. Running at 3,000 strokes-per-minute, the reciprocating saw features geared, continuous motion that can handle heavier loads with less chance of stalling.

The belt sander and reciprocating saw are designed to maximize durability with a rubber over-molded grip and come with impact- and chemical-resistant housing to protect against aggressive shop fluids and withstand tough falls.

Toronto, Ontario ⁠— As an essential business, SATA Canada remains open to supply products and services to all our customers⁠—and