Friday Fun: Unskilled carjackers and why wood shouldn’t be used for suspension repairs 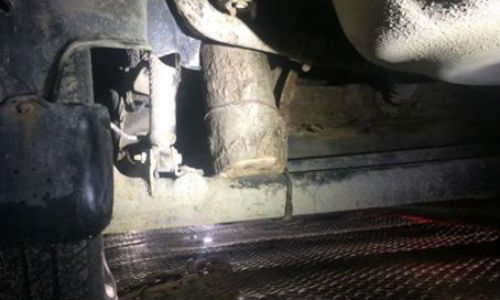 Toronto, Ontario — April 13, 2017 — This week’s Friday Fun tells the stories of an armed carjacking that went in an unexpected direction, Ford’s new pursuit-rated hybrid police car, why wooden logs and chicken wire shouldn’t be used for suspension repair and much, much more!

– A 34-year-old Toronto woman was the target of an armed carjacking this week, but it seems like the crooks hit a snag in their plans. The woman had just visited Tim Horton’s when two men approached the driver’s side window. “I actually undid the window a little bit because I thought they were going to ask me something,” she told a CP24 news crew. “And then they had the gun pretty close to my body — or close to the window, I guess — and they said ‘get out of the car or we’re going to kill you.’”

The woman got out of her car, “frozen with fear.” But the two suspects got into the vehicle and, “to the victim’s surprise, didn’t speed away … Instead, they got out of her car and took off on foot…Police say the suspects ran over to a white Nissan Versa waiting nearby, got in and drove off.” A police officer said the same suspects attempted to carjack a different vehicle the same day, but also ran off. According to the office, “The theory is they weren’t able to drive standard so they were unsuccessful in stealing the car.”

– Ford has unveiled the car industry’s first pursuit-rated hybrid police car. The Ford Police Responder Hybrid Sedan provides an “EPA-estimated 38 miles per gallon – more than twice as fuel-efficient as today’s 3.7-liter V6 Police Interceptor, which gets 18 mpg combined … The new vehicle will be the first hybrid sedan with full pursuit capabilities, which means the car is certified by police agencies to be tough enough to handle police pursuits for longer periods at different speeds and over obstacles such as curbs and flooded intersections.”

– Ford also debuted a redesigned Lincoln Navigator at the New York International Auto Show this past week. The biggest change? “The 2018 Navigator will adopt an aluminum-alloy body,” according to a report from the show. The story goes on to say that, “Lincoln, Ford’s luxury division, said that the switch to aluminum shaved 200 pounds from the weight of the Navigator … The company used those savings to bolster the SUV’s capabilities. Lincoln added laminated front and side glass for improved noise reduction and increased towing capacity …”

– The new Lamborghini Aventador will adopt an old idea that is currently re-emerging: rear-wheel steering. The new Aventador S is a 730 hp monster that can hit about 217 miles per hour. According to a story, “Rear-wheel steering has been around for decades –1980 Honda Preludes and R32 had it–but it’s back in vogue, notably with the Porsche 911 and the Ferrari F12tdf. Similar in concept to those cars, the Aventador S’ version turns the rear wheels opposite the fronts up to 3 degrees below 81 mph, virtually shortening the wheelbase and adding agility. Above 81 mph, the wheels turn up to 1.5 degrees in the same direction to effectively elongate the wheelbase, increasing stability. Lambo claims lower-speed steering inputs are reduced 30 percent with a variable-rate steering system.”

– A one-time “exotic car painter” is now entertaining children on an ocean pier in the US with bus-sized bubbles. Seriously. A local news report dubs the man the, “OB Bubble Man.” According to the story, “When sunsets are at their best, he appears near the Ocean Beach Pier, creating monstrous bubbles that thrill children and awe grown-ups. James, described as a retired exotic auto body painter,” said he “… gets satisfaction out of making kids smile. And old people — if I can brighten their day — I’ve done good, I think.” According to the story, “Cars no longer being his canvas, James adds art to the shoreline … The largest bubbles reach school-bus size, he says, and some float up to two minutes.”

– The Wall Street Journal has finally run a story about the rising cost of repairs as a result of the new driver assistance technologies being added to cars. According to the article, new safety features like autonomous braking sensors and cameras are being built into the area of the car most prone to accidents, such as the bumper. When these features need replacing, the cost can be five times what used to be the case.

“It costs $166 to fix a conventional left mirror on a 2015 Mercedes-Benz ML350, according to Allstate Corp., but the repair bill balloons to $925 for that mirror with collision-avoidance technology. A tech-equipped mirror on a Lexus RX 350 is $840, more than double the $390 for a mirror without the tech,” according to the article. Even drivers with “more basic cars” may be liable for accidents involving cars with safety features. The story goes on to note how insurance rates are rising as a result, including the example of State Farm, which raised Illinois insurance rates “5.9 percent, the largest increase since 2003.” Liberty Mutual CEO David Long is quoted as saying that, “Safer vehicles are more expensive to repair,’ and that’s increasing the severity of claims. “The Boston-based company, among the 10 largest car insurers, has been increasing rates by an average annual 9 percent since late last year,” according to the article.

– A State Farm adjuster has refused to pay for pre-scans on 2016 Ram bedside replacement according to a report from our US-basec content partner, Repairer Driven News. FCA issued a position statement calling such scans mandatory. But in this case, when the damage estimate on a Ram 1500 was submitted, the State Farm representative declined to pay for the scan. According to the shop owner the insurance adjuster told him that, “I saw the memo from Mopar about pre-scans, but it does not seem necessary to pre-scan a vehicle due to bedside damage.”

– A report from a Quebec police agency notes that Sunday night, in Val-des-Monts, Québec, near Ottawa, a 28-year-old man was found driving a 1999 Toyota Tercel that was using a wooden log as part of the suspension. Police recounted the problems with the car in the press release: “[Three] bald tires, no windshield wipers, and a rear suspension rigged with wooden logs and chicken wire.” A story in the Ottawa Citizen notes that the driver was given a $481 ticket. The car, such as it was, was impounded. The man also had an open beer in the car, but was found to be sober. Not smart, necessarily, but sober.

– A report in the Toronto media notes that, “Toronto’s red-light camera program is headed for a major expansion.” Mayor John Tory has “championed” road safety in the city after a series of cycling deaths. The point of the expanded red light camera program is to get people to drive more slowly, according to Tory. “I think the objective here is to get people to slow down and drive safely in school zones, places like that, to stop this carnage that’s been happening on the roads and to get (the number of traffic deaths) down to zero,” the mayor was quoted as saying. The initiative is just one of many “traffic calming” regulations and changes coming to a city choked on already slow traffic.

– Other traffic calming proposals could be coming to Greater Toronto Area streets in the years ahead. According to one report, “A Toronto-area MPP is leading a campaign to make school zones in the city safer. Colle is preparing a private member’s bill that would expand school zones to include all roads adjacent to a school, and also establish a minimum standard of pavement markings and signage to alert drivers.” The story went on to say that, “In addition to making school zones safer for children, Colle said the province needs to increase penalties for drivers who kill or injure pedestrians. ‘I’m for quadrupling the fines and penalties, especially when you inflict serious injury on someone or if you kill someone,’ Colle said. ‘I would ban them from driving for life’.”