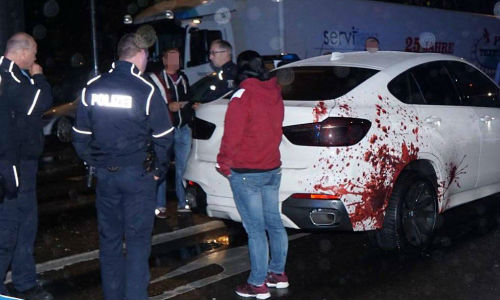 Toronto, Ontario — September 28, 2017 — In this week’s edition of Friday Fun, a former body tech is drafted by Hollywood, Boyd gets back online in the American deep south, an attention getting decal gets attention from the police and much, much more!

– Another car has plowed into a bodyshop, this time in Abilene, Texas. According to a report by TV station KTXS, police are looking for a driver who flipped a vehicle and then ran from the scene of an accident. According to the report, “Police say a driver lost control of their white Dodge Ram around 10 p.m. Saturday on Pine and North 10th streets. The truck took out the fence at Abilene Auto Solutions and plowed into multiple cars. Police told KTXS at least seven vehicles, including several BMWs, were damaged … The driver got out and ran.”

– The Lockport Journal interviewed a former Buffalo-area autobody worker, Dan Buttery, and discussed how he has managed to become a supplier of custom-built metal structures. His company, DB Designs and Black Lab Metal Fab, was recently tapped to create a giant dragon head for a movie. In the interview, Buttery talked about how he started doing car restorations with his father when he was just 16. He was going to school for autobody repair when his father passed away.

“About five years ago, my father was coming home from Sturgis (South Dakota), and got into a motorcycle accident and passed away. Instead of doing the cars, I got more involved with the metal work. I was always welding when I was a kid and doing small stuff. But after my father passed, I picked up a plasma cutting table when I was in Vegas for the SEMA automotive show,” says Buttery. “I can cut pretty intricate designs with it for people, like their logos or their sports team’s logos.”

Eventually the producers of a movie called Wolf Boy asked him make a giant dragon head. “It was my first time doing something on this big of a scale in a short period of time,” he says. “They wanted me to come up with a sketch. They gave me a picture of something they wanted, but they wanted to me add my own twist because they said this was supposed to be my masterpiece. It’s supposed to be one of the biggest things beside the main actor in the movie. So, I came up with a sketch, just a quick rendering what I saw for a dragon’s head and a dragon body. Then, I basically just started off with one piece of metal. I started bending it and worked my way from there … When they came down and took a look at it, they liked it a lot.”

– German police spotted a car that appeared to have been in a horrifying collision so they pulled over the driver for a chat. Turns out the enormous blood-spatter was just a realistic decal, “and they sent the man on his way,” according to a story on Boing Boing.

– Boyd Group announced this week that the 63 collision repair centres in Florida and Georgia that were temporarily closed have now re-opened. According to a press release, nearly all employees have been able to return to their homes and to their work, and “… none of the affected locations sustained damage that will result in any long term business interruption.”

Tim O’Day, President and COO of the Boyd Group, was quoted as saying, “We are pleased to report that all of our employees have come through this storm safely. We continue to support them and our local communities as they are coming together to rebuild. Our thoughts are with those that have been negatively affected by this and other recent storms.”

Brock Bulbuck, CEO of the Boyd Group, discussed some of the financial effects the company will suffer. “While we are certainly thankful that the outcome from the hurricane and related storms is much less severe than what might have been anticipated in the days leading up to the storms, we do expect that these events will have a noticeable impact on our third quarter results. In addition to lost production and sales during the closures, which ranged from one to eight days, we will also have the impact of some extra costs, as well as disruption to the business both before and after the closures. Our glass business will also be negatively impacted. Our teams are currently assessing the full impact of the storm and we will provide further details when we announce our third quarter earnings results on November 8.”

– Volvo is about to test a new method for selling cars. Sales of a couple new models will be limited to an online site, eliminating, “… the need for dealers to carry the car in their inventory or even have a demonstrator in their showrooms,” according to a report by Wards Auto.

Executives at the company are hoping to reduce the prohibitive cost of stocking vehicles on dealer lots. According to the report, the new Volvo V90 will only be sold, “… to customers who specifically find and order the car online. Buyers will have to wait up to three months for the vehicle they order to arrive at a dealership for delivery, according to Volvo officials.”

– Ride-hailing company Uber is shutting down its business in Quebec, according to a report by the Financial Post. The province had demanded the company adopt new regulations. Quebec officials insisted that the background checks on new drivers be performed by police instead of private security firms. As well, “Uber drivers will be required to undergo the same number of training hours as traditional taxi drivers, which is 35 hours, instead of 20 hours.” According to the head of Uber in Quebec, “…the province didn’t consult with the company before introducing the new rules, which he says make it impossible for the service to continue …”

– Dyson, a manufacturer of high-end vacuum cleaners, has been secretly designing an electric car it will release by 2020. Dyson has developed a stellar reputation for design by producing revolutionary consumer products (like its vacuum cleaner) that dramatically outperform existing competition in novel, intelligent ways. Only time will tell if they can do the same thing with cars.

According to a report by Bloomberg, “Dyson said the company already has 400 engineers dedicated to its car project, which has been working in secret for the past two-and-a-half years. In the past year, the company has made a number of prominent hires from Aston Martin and Tesla … Dyson said its car would use solid-state batteries that are smaller, more efficient, easier to charge and potentially easier to recycle.”

The report also noted the company is working to, “… commercialize solid-state batteries and said earlier this year it hopes to have them in its electric vehicles by 2020.” The founder of the company said he hopes, “… the vehicle will be just the first of a line of electric vehicles from Dyson and predicted that within a few years electric cars would be the largest source of revenue for the company, eclipsing its existing products.”

Toronto, Ontario — Whether speeding down a North American highway, the Autobahn in Europe or Asia’s highway network, chances are