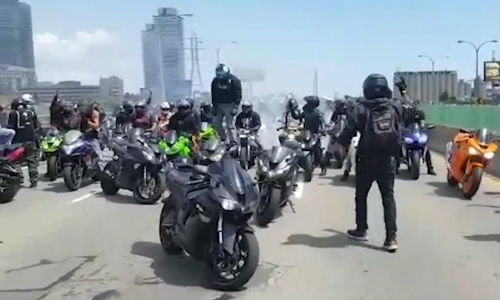 Toronto, Ontario — August 10, 2017 — In this week’s edition of Friday Fun: Flaming cars in the UAE, another mass motorcycle run in Ontario, the real take on electric vehicles and much, much more!

– Ontario Provincial Police have launched an investigation after more than 100 motorcyclists cruised highways in the Greater Toronto Area for three hours this past Sunday. Cruising itself wasn’t the problem, of course, but the motorcyclists stopped traffic to pull stunts and wheelies. The bikers travelled on Highways 401, 403, 409, the Queen Elizabeth Way, the Gardiner Expressway and the Don Valley Parkway. They did it all without any action from police, according to a report by Global. “Those actions could potentially cause serious issues if there was a collision. This is on the verge, on the brim of criminal negligence had there been a wreck, had someone got into a collision because of stopped traffic,” said an OPP spokesperson. The officer admitted that the group caused “massive” traffic congestion. “All to get off their vehicles and watch other riders perform stunts, smoke their tires and basically just be trouble on the highway … This is completely unacceptable and unbelievably dangerous for this kind of activity to be happening,” the spokesperson was quoted as saying. This incident comes after a similar ride last year.

– A newspaper in the United Arab Emirates, The Khaleej Times, reports soaring temperatures, “… have caused seven vehicles to burst into flames in the past two months. The civil defense are urging drivers to ensure their cars are maintained properly to prevent fire damage.” The news report features video posted online by the region’s civil defence authority that shows firefighters arriving on scene to extinguish a parked vehicle that had burst into flames in the 40-degree heat. According to the report, one incident saw a truck catch fire while it was on the road, causing the driver to lose control. Authorities have warned locals not to leave flammable objects inside cars. Poor maintenance was also cited as a reason for the fires, as were, “… illegal modifications and improper maintenance of vehicle electronics …”

– A sheriff’s deputy with two decades of experience has been accused of torching his own vehicle as part of an insurance fraud scam, according to a report from Fresno, California. The law enforcement official is accused of torching his 2002 Toyota 4Runner in April. According to the police the deputy, “… took out an insurance policy — including extra coverage — on the vehicle just days before it burned.” He is charged with arson and insurance fraud. According to the story, “He initially claimed to have last seen the car at about 6:30 the night before it was torched. But police uncovered surveillance footage of him driving the SUV to a club around 9 p.m. and leaving just before 2 a.m. … Another camera picked up the SUV leaving Moua’s home 20 minutes later — just 15 minutes before the fire started.” The officer has entered a plea of not guilty, but according to the report police said, “… he confessed to them about three weeks after the fire. According to Clovis, Calif., police, [the officer] came in to speak with them while wearing his deputy’s uniform and driving his patrol car.”

– Allstate’s new QuickFoto Claim app, available to its US customers, has led to announcement from the insurer that it has laid off 500 claims adjusters as a result of the technology that allows drivers to take a picture of collision damage and submit the photo to Allstate for an estimate. The app is generating huge interest in the collision repair sector south of the border. A report in the collision repair trade press in the US finds some shop owners are complaining that estimates derived from the photos are coming in far too low. Even so, the technology seems to be suddenly wildly popular with one shop owner reporting that, “… 15 percent of his customers are producing photo estimates.”

– The theft of gasoline tankers in Mexico is becoming a huge problem. Tankers from the country’s national oil company PEMEX are often stolen and the gasoline sold at illegal curbside markets. According to a report from Bloomberg, “While this illegal curbside commerce has been going on for decades, it has exploded in the past few years and now costs Pemex, Mexico’s state oil company, more than 20 billion pesos ($1.1 billion US) a year.” The fuel thieves also dig up pipelines and hijack tanker trucks.

– There seems to be a new consensus forming today that a coming wave of electric vehicles will soon flood the market. A flurry of reports over the last couple of months have claimed as much. But many in the industry remain skeptical. A recent interview with Don Walker, CEO of the massive Aurora, Ontario-based parts maker Magna International, knocks down some of the hype. Speaking to Automotive News, Walker recently said that he thought, “… the primary reason that companies were publicly talking so much about electric vehicles (EVs) and self-driving cars was simply PR, and the desire to be seen as ‘progressive.'” Going on Walker said that ‘privately’, the “… auto companies are far more bearish about the growth time lines for the just mentioned technologies.” For his part, Walker says, “… it’s been clear for a while now that there’s quite a gap between what most auto companies publicly say they believe about EVs (and self-driving cars) and what they are actually doing and have done to date.” He was quoted as saying, “I am going to get criticized by a lot of people who say I don’t know what is going on … Quite frankly, auto companies can’t tell publicly what they really believe. They know what’s going to happen, but they have to say what is going to be popular to be perceived as a progressive company … We’ve got a lot of feedback from many of the car companies, and they actually believe this to be right.” According to Walker, projections currently being tossed around that 25% of new vehicle sales by 2025 will be electric are not “realistic.” Walker thinks a more likely number is in the 3 to 6 percent range, with the, “… higher end of that estimate being reliant upon fast growth in China’s market over the coming years.”

– Sticking up for the good old internal combustion engine is Mazda Motor Corp. A report by Reuters claims it will become, “… the world’s first automaker to commercialize a new type of gasoline-powered compression ignition engine that is 20 percent to 30 percent more fuel efficient than the Japanese automaker’s current engines.” According to a press report this week Mazda engineers have designed a, “… much more efficient petrol engine using technology that deep-pocketed rivals have been trying to engineer for decades.” The so-called ‘homogeneous charge compression ignition (HCCI) engine’ ignites, “… petrol through compression, eliminating spark plugs. Its fuel economy potentially matches that of a diesel engine without high emissions of nitrogen oxides or sooty particulates.” The head of Mazda R&D was quoted as saying, “We think it is an imperative and fundamental job for us to pursue the ideal internal combustion engine. Electrification is necessary but … the internal combustion engine should come first.”