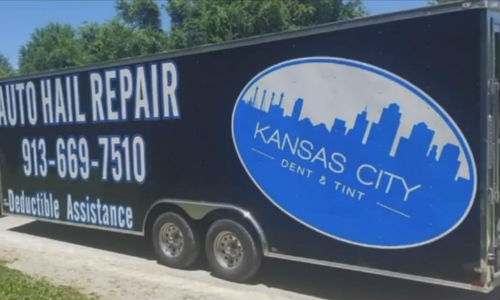 Toronto, Ontario — June 29, 2017 — In this week’s edition of Friday Fun we look into a study out of the US that seems to link legalized marijuana with an increase in crashes, a stolen mobile hail repair unit that held $200,000 worth of tools, new luxury auto brands and the ones that are no longer with us and much, much more!

– A study out of the US links legalized pot with a rise in car crash claims. The Highway Loss Data Institute, an insurance research group that analyzes data to identify emerging trends in auto safety, found that collision claims in Colorado, Washington, and Oregon went up 2.7 percent in the years since legal recreational marijuana sales began. A report in the Detroit News quotes Matt Moore, a Senior VP with the institute as saying, “We believe that the data is saying that crash risk has increased in these states and those crash risks are associated with the legalization of marijuana.”

According to the report, legal recreational pot sales began in Colorado in 2014, and then in Washington and Oregon the following year. The 2.7 percent increase in accidents was found in comparison to surrounding states. Canada is set to legalize pot at this time next year.

– The California Department of Forestry and Fire Protection says a wildfire sparked by a traffic accident is now raging out of control. A report carried by the National Post says the accident occurred on a remote highway 80 miles east of Los Angeles and, “… has grown to nearly two square miles (over 500 hectares) in just a few hours.” Firefighters working in high temperatures are battling the wildfire in the Beaumont area of Riverside County. The report said there was “zero containment” of the fire. Two people were hospitalized from the single vehicle crash. The car caught fire and the flames quickly spread to the surrounding forest.

– A story carried by a Fox affiliate in Kansas describes the theft of a portable hail repair trailer. According to the report, Keith Starling and the crew of KC Dent are now out $200,000 in tools and computerized car keys. The crew had been on location over the past month at Legends Toyota in Kansas City, repairing hail-damaged cars.

“On Sunday morning, Starling says his trailer vanished along with over $200,000 in tools, not to mention keys to around 40 cars,” according to the report. Starling was quoted as saying, “We’re probably looking at about $30,000 in keys to be replaced. That’s just in keys on cars …” The big loss are the stolen tools. Starling says most of them are professional grade, and some are impossible to replace. Now the crew of eight is out, “on average, $25,000 apiece in high-tech repair tools. ‘You took the stuff that allows me to make money. I can’t even make money to get myself back out of it,’ Starling was quoted as saying. His crew, contract workers, are travelling professionals who travel between mass-repair jobs, repairing hundreds of hail-damaged cars in the wake of big storms. “If this storm ended right now, and the dealer said, ‘we’re not going to do anymore cars,’ I can’t go to Minnesota because I don’t have any more tools,” one of the workers was quoted as saying.

– Ontario Provincial Police (OPP) are warning about an uptick in big speeding tickets and accidents this year. According to a report by Metro, this year there have been 30 road deaths as a result of speeding. This is almost double the number from last year at this time. Officers have laid more than 1,400 charges so far this year against driver clocked at 50 km/h or more over the posted speed limit, according to the report. The OPP recently laid charges against a group of motorcyclists who were stunt riding on Highway 401. The force also recently tagged a group of drivers who were speeding in high-end sports cars by rounding the group up into a highway rest stop.

– It seems the average American is now too poor to buy a new car. The data comes from a study performed by bankrate.com. According to a report in Fortune, the, “… median-income household today can only afford an average-priced new car in one of the 25 largest US metropolitan areas … Based on the ’20/4/10′ rule where financial planners recommend a household spend 20 percent of income on a down payment, take a 4 year loan and use 10 percent of income on interest and insurance payments, those making median income in the Miami area can afford to buy a $13,577 car. The average new car costs $35,368 including local sales taxes.”

The same math applies across much of the US, and it seems likely that it would apply to Canada as well. It’s not all bad news for vehicle owners though. When it comes to used vehicles, “Cars are lasting longer and longer now, routinely going over 150,000 miles without needing major repairs,” according to the report.

– Two new luxury car brands have recently launched. Lynk & Co is a new brand from China-based Zhejiang Geely Group. Geely is the company that bought Swedish automaker Volvo in 2010. The new luxury brand the companies are coming up with will focus on, “… internet connectivity and innovative purchasing models in certain markets, targeting the young professional demographic.”

The other new luxury brand is Genesis Motors, part of Hyundai Motor Company. The former Director of Design at Lamborghini is a Senior Vice President at Genesis and the company is now opening dealerships in Canada. A recent report carried by Stuff Motoring looked back at some of the luxury brands that have come and gone over the years.

• Efini: This was a luxury brand launched by Mazda for the Japanese domestic market.
• Sterling: According to the story this company, “… sold a version of the Rover 800 in America to take on Acura’s version of the Honda Legend … Sales were initially strong, with the Sterling 800 offering a classic ‘British interior’ that appealed to a number of American buyers, but terrible build quality soon ground things to a halt and Sterling was wound up in 1991.”
• Merkur: Who remembers the 1985-era Ford luxury brand? The brand was, “… one of the shortest lived marques in US history when Ford pulled the plug in 1989.”
• DS: This luxury brand was launched by Citroen in 2012. It was supposed to be an “avant-garde” luxury brand but the company is still struggling to make money. According to the report, “DS sold 129,000 cars when it launched in 2012 and this has steadily fallen since then to a low of just 85,981 last year.”

– Troubled Japanese airbag maker Takata filed for bankruptcy this past Monday. According to reports in the business press the organization, “… may run out of cash to replace parts.” If that happens, Honda, Toyota and other companies could end up paying the bill. So far Takata has “pledged to recall and replace tens of millions of defective air-bag inflators used by 19 car and truck makers around the world.” But the bankruptcy suggests events could take a different turn. According to one of the reports the bankruptcy filing, “… listed more than $10 billion in liabilities … should [Takata’s] financial assets be exhausted before all the work is done, carmakers may have to cover the difference.” According to a source in the story, “The company has a market value of about $120 million and already faces debt and penalty obligations that are more than double its cash.” At the same time a Takata asset sale, “… will generate about $1.5 billion to $2 billion.” That is, “There’s not enough money,” according to the story. As it is, only, “… 38 percent of the 43 million air bag inflators under recall in the US had been repaired as of May 26 …”

– The new CEO at Ford, Jim Hackett, is already making some controversial calls. The company has decided to move North American production of the Focus to China. According to a news report this decision breaks a, “… widely accepted norm in the global auto business,” which is, “build where you sell.” Donald Trump has already complained about car companies moving production to Mexico. It’ll be interesting what he says about Ford moving the manufacturing of a common model like the Focus to China. But the decision to move the factory to China emphasizes how auto executives see the industry—there are big changes happening. Big decisions need to be made to maintain profitability. Having a major American model built in China, where wages are a fraction of those in North America, is one of those decisions. A story in the Detroit Free Press also notes that Ford will continue to focus on building SUVs in America.

According to the story this suggests, “… that Ford is betting longer term oil prices will stay comparatively flat and demand will remain strong for a wide portfolio of SUVs.” The story in the Free Press says an assumption oil prices will stay low long into the future, “… arguably are bold bets … given the jockeying by Saudi Arabia and Iran for regional hegemony in the Middle East, one of the world’s largest—and most volatile—oil patches.”