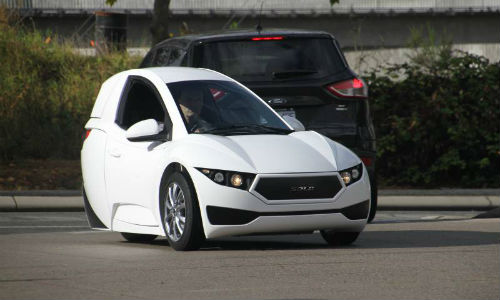 Toronto, Ontario — September 15, 2016 — This week we look into East Coasters prepare for a spike in car insurance premiums, an Alberta F-150 driver who can’t find parts for a seven year-old truck and a new electric car being built in B.C.

– An interesting report on the CBC this week starts with an interview with Dana Alexander, the owner of a Fredericton auto body shop. He explains to the reporter that New Brunswick car owners seem to be getting more and more comfortable using their auto insurance to fix damage to their vehicles. Alexander is quoted as saying that, “We used to see as high as 40 percent customer-pay. Now it’s swung that we’re probably up to 80 percent insurance … We’ve had people put in for a $1,000 claim — less than $1,000. A few years ago if it was $1,000, they were going to pay that out of pocket.”

The article goes on to state that the surging insurance claims “have grown by $70 million in” New Brunswick over the last three years and that has “helped push New Brunswick to the verge of what could be a nasty round of auto insurance rate hikes in 2017.”
Information from Canada’s General Insurance Statistical Agency (GISA) shows New Brunswick drivers generated $304.8 million in auto claims costs in 2015. It’s the highest in 14 years and a 30 percent increase since 2012. At the same time, auto  premiums have been in decline, sinking to an average of $759.38 per vehicle in 2015, the lowest level since 2000.

– A report in the Waterloo Record notes that the “great-grandson of Henry Ford called on the auto industry and public institutions to address ethical issues emerging in a world where robot cars will make life-and-death decisions in roadway crashes — and to do it soon.” Ford was talking to reporters in Dearborn, Michigan. He went on to say that, “These cars will have the ability to process data and make decisions much faster than we will as humans … No individual company is going to program these vehicles with a set of ethics that isn’t bought into by society at large.” The discussion to set robot-car ethics must include the auto industry, government, universities and ethicists, Ford reportedly said. With self-driving cars “set to hit the road over the next five years, the need for this discussion is urgent,” he added.

– Ford is holding its annual investor conference this week. One of the big announcements the company made was that “it’s moving all of its small-car production out of the US and into Mexico,” according to media reports. Fiat Chrysler Automobiles recently made a similar claim. According to one article the strategy on the part of the North American OEMs is basically, “Let the Japanese and the South Korean automakers figure out how to build enough Corollas and Elantras to generate acceptable profits. We’re sticking with the juicy margins on much larger vehicles.”

– Ray Tanguay, the automotive adviser to the provincial and federal governments—the so-called Ontario “car czar”—spoke at the annual Auto Technology Symposium at the University of Waterloo this week. He suggested the province needs to get moving on an automation strategy for its auto sector.

According to a report on the appearance, “Autoworkers in Mexico are paid $8-an-hour, all in, but robots can be developed to do that work for $2-an-hour … You don’t have to go all the way to Mexico to find cheap labour — automate. I think that’s a key point.” The report notes that the technology cluster between Waterloo and Toronto, is “second in size only to Silicon Valley, [and] will play an increasingly important role in the auto sector.”

According to Tanguay, “[The] technology cluster attracts, retains and produces talent needed by the industry, and it costs 30 to 50 per cent less to do research and development in Ontario than in California … The province needs to highlight its advantages in research and development to get back on the list of possible locations for new auto plants.”

Tanguay retired as President of Toyota Motor Manufacturing Canada and was appointed the government’s “car czar” in June 2015 to help guide public policy that supports the auto sector, according to the report. “The auto industry accounts for more than 40 per cent of southern Ontario’s economy, generating about $16 billion in goods and service annually.”

– Why is it these things always happen in Florida? Near North Fort Myers this past Tuesday a man stole a vehicle from the “front of Custom Tire and Auto—and brought his kids along for the ride.” Deputies arrested the man down the street. He had just brought his own car into the shop for an oil change, and clearly needed to get his kids somewhere fast. “It’s just a very unusual thing to happen,” said the owner of the shop. The media report noted that shop employees typically park a client’s car out front running and with the AC on. The policy had “never been a problem, until Tuesday morning.”

– A Nissan executive in an interview this week said the company “wants to get young people excited about cars.” The executive admitted, “he is concerned by what he sees as a lack of interest in buying a first car by the current generation of new drivers.”

– A report from on the CBC details the travails of an owner of a Ford F-150 who can’t find a part for his 2009 vehicle. “I don’t think it’s unreasonable to expect a vehicle to last 10, 12, 15 years. Not seven,” the owner said. According to the report, “Ford says there is ‘nothing further’ it can do.”

A Toronto mechanic, Eli Melnick, was asked to try to and hunt down the part. Melnick was described in the report as having more than “40 years’ experience” and having repaired “over 100,000 vehicles.” He couldn’t find it either, having spent several hours contacting, “large and small aftermarket suppliers …” Melnick was quoted as saying, “I was really surprised … You’re talking about an F-150. It’s the number one selling vehicle in North America, so why are we having this grief? This does not look good on Ford.”

The director of Canada’s Automobile Protection Association says Ford should “make things right for its customer.” The article went on to note that, “Canada has little consumer protection when it comes to ensuring companies provide auto parts for any period beyond a vehicle’s warranty … A piece of consumer legislation in Quebec provides the best protection in the country.” The Quebec law requires OEMs to make a part “for a reasonable amount of time.” According to the report the “Automobile Protection Association says a ‘reasonable’ amount of time would be 15 years, because that’s the average life of most vehicles on Canadian roads, including Ford pickup trucks.” Once the CBC contacted Ford, the carmaker said “the auto part was ‘discontinued due to exceptionally low demand.’” Ford is now arranging for a supplier to build the part for the owner.

– Uni-Select has reported second quarter financial results for 2016. The company enjoyed strong sales of $323.8 million, an increase of 14.6 percent over last year. The increase in sales was helped by the addition of five new acquisitions and 18 new stores over the period.

“We made good progress in Q2 on the earnings and acquisition fronts. The organic growth for the quarter was less than anticipated, but the outlook remains positive for the balance of the year.” said Henry Buckley,President and Chief Executive Officer, in a press release.

– Electra Meccanica is a new small electric car being produced in Canada. According to a report on Driving.ca, the company has “178 orders” for its single-seat Solo. The car was introduced in the lead-up to the recent Luxury & Supercar Weekend held in Vancouver. The car will sell for just $19,888.

The company has an assembly facility in New Westminster and will have a full-charge range of “approximately 160 kilometres, a top speed of 130 km/h and a charge time of between three and six hours. Despite having a single seat and three wheels, a motorcycle licence is not required to operate the Solo; a regular Class 5 vehicle driver’s licence is all you need.”