Friday Fun: Watch out for deer; the dirty secret behind EV batteries 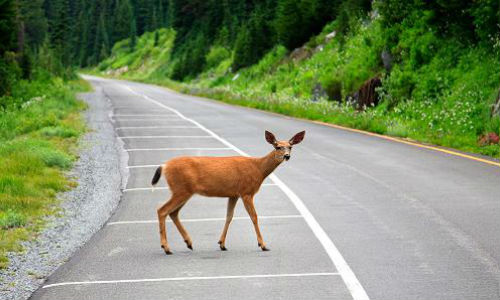 Toronto, Ontario — June 22, 2017 — In this week’s edition of Friday Fun, we look at a warning on deer, BASF’s prediction on the most popular vehicle colours of the coming years, a whitepaper on new car materials, the truth about electric cars and much, much more!

– The Wisconsin Department of Transportation put out a press release this past week warning that the number of motorists striking deer is on the rise. So much so, that the department felt the need to issue an official warning. Local TV station WSRW quotes Bill Yach of BRB AutoBody as saying, “it usually is fall when they go into rut, that’s usually when we see more deer hit. But it just reversed now.” Yach went on to say he’s noticed the steady increase of work for his autobody shop due to deer crashes in the spring. According to a member of the state patrol, “in June there tends to be an increase in crashes where people are injured.” Both sources agreed that hitting the deer head-on is the “best reaction a driver can make to prevent other accidents.” According to the report, if a deer does dart out, it’s best just to hit it to avoid any other serious consequences. “My advice would be don’t swerve. If you’re going to hit the deer, hit the deer,” the officer was quoted as saying. This is good advice in the wake of the sentencing of a woman who swerved her car to avoid hitting ducks … and then crashed into another vehicle.

– If it seems as though there are a lot of blue cars around these days, you’re right. Each year BASF releases its predictions on the future of car colours. The company develops predictions using a “wide array of data, as well as observations of trends in art and design.” According to a report on MSN, BASF is “expecting neutral colours such as black, white, silver, and gray to remain popular.” Other trends: paints with more pearl and metal flake that ‘highlight aspects of the bodywork …'” While neutral tones will be the most popular, where there is colour, “people will be choosing more saturated hues,” so expect “richer, bolder paints.” For Europe, the Middle East, and Asia BASF is predicting a desire for “luxury, new spins on old styles, and individuality. As a result, the colours chosen to represent this broad region include a solid brick color, a matte gold, and a matte green metallic.”

– A new whitepaper takes a look at the future of body materials. It is, of course, “everything but mild steel.” According to the Centre for Automotive Research (CAR), the fleet of 2040 will have a “smaller percentage of lower-tier steels (mild steel; high-strength, low-alloy; and high-strength steel) than it will have of carbon fibre and other composites.”

– A write-up by De Zeen magazine notes that an American architect used “cedar, steel and large expanses of glass to transform a car repair facility into a lively venue for working, dining and sipping cocktails … the adaptive reuse project entailed the conversion of an old auto body shop into a mixed-use facility that contains a cocktail bar, restaurant, wine tasting room, cafe and design studio.” According to the story, “Initially, new construction was envisioned for the site, but the team took a different approach after seeing the auto shop’s ‘unique character, patinas, large volumes and readymade courtyard space.’ Western red cedar cladding, steel panels coated in zinc and aluminium alloy, and large garage doors were incorporated throughout the project. But original building elements were preserved wherever possible.” The story goes on to note that, “Layers of haphazard additions were peeled back to reveal natural and fundamental building materials, which were then exposed and expressed as part of the new design.”

– Geary Avenue in Toronto’s west end is an industrial street just north of the train tracks that run through the middle of the city. The street has long hosted a series of collision repair centres. Today, however, the area is a, “a strange hybrid of a street where you’re just as likely to find an autobody shop as you are a jam space, a brewery, an architecture firm or an artist studio.” As rents continue to skyrocket in other areas of the city, the Toronto art crowd has begun to move in around Geary Avenue. A recent walk through the area turned up evidence of the mix. On nearby Miller Street you might run across Customer Coaches, a family-run autobody shop that does high-end collision repair service. There is an egg shell blue Land Rover out front as well as some more exotics inside next to the full-size paint room. They now have a new neighbour: a firm dedicated to shipping and receiving art pieces.

– Windsor auto workers were recently surprised by an announced shut down as “US sales of the Windsor-made Dodge Grand Caravan have been temporarily halted over American government concerns,” according to a report carried by the Windsor Star. Dino Chiodo, the President of Unifor Local 444 (which represents workers at Fiat Chrysler’s Windsor Assembly Plant), said that a few weeks ago the American government expressed some technical concerns that are being addressed. “They’re already working on this, so I don’t see it as a big long process … But at the end of the day it has to be done and we get it. Everybody’s working on this and we’ll be selling in the States again in no time,” said Chiodo to a Windsor Star reporter. “We have been walking through this for a few weeks now. I’m not overly concerned. It has to be remedied. But it’s doable,” Chiodo was quoted as saying.

– The dirty truth about electric vehicles is that the batteries are “eco-villains,” according to a study. A Swedish environmental research institute was commissioned by the Swedish Transport Administration and the Swedish Energy Agency to investigate lithium batteries. Over the entire life cycle (including production of the battery), “The report shows that the battery manufacturing leads to high emissions. Every kilowatt hour of storage capacity in the battery generated emissions of 150 to 200 kilos of carbon dioxide. Another conclusion of the study is that about half the emissions arising from the production of raw materials and half the production of the battery factory. The mining accounts for only a small proportion of between 10-twenty percent.”

– Insure.com has released its annual ranking of the cheapest and most expensive cars to insure. All figures below are in US dollars:

Five most expensive cars to insure

PrevPreviousInsurance professionals get an inside view at Toyota event
NextCARSTAR and Axalta raises $4,000 for Cystic Fibrosis CanadaNext