Friday Fun: Car audio installer isn’t allowed to use his own stereo 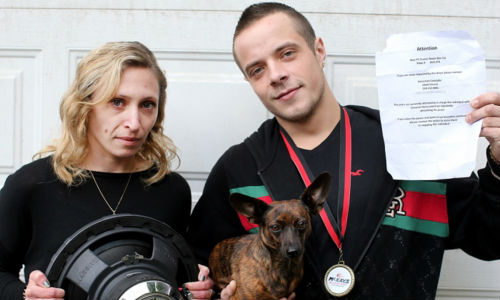 Toronto, Ontario — October 19, 2017 — In this week’s edition of Friday Fun, fake cops in Calgary, car audio installer forced to turn down the volume in BC, a leopard on the loose in India’s largest car factory and much, much more!

– Calgary police are investigating a bizarre incident in which a vehicle was stopped by a man impersonating a police officer. A report by the Calgary Sun notes that a man was driving south on 69 Street SW when he was stopped by a white Honda Civic that had, “… red and blue lights attached to the front window.” According to the report, “The driver of the Civic got out of his vehicle and walked up to the man’s vehicle, identifying himself as a special forces police officer. It is alleged the man advised the driver that he was speeding and that he could either go to jail or pay a fine, and that if he paid the fine immediately he would receive a discount.” The driver refused to pay the fine, obviously. The mysterious (and fake) officer returned to his car and took off. Calgary police were sure to make clear that it is “extremely rare” for a, “Calgary police officer not wearing a uniform to conduct a traffic stop in an unmarked vehicle.”

– The National Post carried an amazing story about a guy, Dustin Hamilton, who has been banned from playing his car stereo in Central Saanich around the city of Victoria on Vancouver Island. According to the story, “… Hamilton is prohibited from driving his PT Cruiser at all in Central Saanich unless he’s taking his girlfriend to work and back.” The reason? His massive stereo system. Over the summer, police in Central Saanich have received 17 noise complaints from residents along a certain stretch of road.

“People are saying their pictures are rattling on the wall and coffee cups are falling off the table. They feel the vibrations through the floor of the house. The noise is scaring the livestock. Little kids wake up crying in the middle of the night because the stereo scares them. It’s certainly had an impact on the West Saanich corridor … It’s my understanding the entire back seat of his car is totally rigged up with stereo equipment. It’s quite something,” a police office was quoted as saying.

Nevertheless, Hamilton wound up in court over his sound system and the associated noise complaints. Hamilton was quoted as having said to the judge, “It’s what I do for a living. It’s what I do for love. I’ve put hundreds of hours and my girlfriend’s put all her money into the car. It’s what we love. To say don’t play your stereo in Central Saanich … is depressing… I didn’t know it was doing this … Nobody told me it was doing this … It sounds like a symphony in there. It’s the No. 1 sound car in Victoria. It’s clean sound and I love it. It’s not just bass. It’s crystal-clear vocals. I’m an audiophile. It’s what I’ve done for years.”

– A leopard on the loose inside India’s largest car factory has been caught and tranquilized after sparking a frantic 36-hour search by 200 police and wildlife officials, according to a report by The Guardian. The cat was spotted inside the factory by guards at Suzuki’s manufacturing plant in a town near the capital of New Delhi. Workers were evacuated from the plant and police launched an operation to catch the animal, “… even using live goats and raw meat to lure it out of hiding. But the leopard remained out of sight until it returned to the same location where it was first spotted.” The wildlife team was successful in tranquilizing the leopard by the late afternoon,” said a police officer. “No one was injured in the operation and area has been declared safe.”

– Are the complex infotainment features now found on modern cars a safety issue? The AAA’s Foundation for Traffic Safety thinks so. The organization commissioned researchers with the University of Utah to investigate the effect the new screen-based controls have on driver attention. The study found the new generation of control interfaces are more distracting than previous generations of reads outs and dials. The researchers were asked to study how much time, “… drivers’ eyes spend away from the road, and the mental demand that tasks require when using these dashboard systems. They also tested how long it takes drivers to complete tasks like calling someone, sending a text, and programming navigation while driving. The researchers tested 30 different 2017 vehicles from a wide variety of carmakers, and found that 23 of these had ‘high’ or ‘very high’ demand on the driver–including the Tesla Model S, the Honda Civic Touring, and the Ford Fusion Titanium. Not a single car of the 30 required only ‘low’ demand. Unsurprisingly, the group found that typing in an address is the most distracting element of these systems; programming navigation takes an average of 40 seconds. At 25 miles per hour, that means a driver could be going the distance of four football fields while completely distracted from the road.”

The story goes on to say, “Part of the problem is that these interfaces require driver attention to complete any task–even if they’re using a voice command systems, as a previous study found. When they’re poorly designed they lead to mentally taxing frustration, another distraction.” The President and CEO of AAA was quoted as saying, “Drivers want technology that is safe and easy to use, but many of the features added to infotainment systems today have resulted in overly complex and sometimes frustrating user experiences for drivers. Some of the latest systems on the market now include functions unrelated to the core task of driving like sending text messages, checking social media or surfing the web–tasks we have no business doing behind the wheel.”

– Peter Tertzakian, a columnist for the Financial Post, recently took on the idea that a big shift to electric vehicles (EVs) is imminent. Tertzakian pushed back on an idea that is suddenly common: A huge wave of EVs are going to enter the market as countries and cities announce future bans on internal combustion engines. Others argue there is no way a large and easy shift can occur. One reason an easy shift is not going to happen has to do with trends in scrappage rates, according to Tertzakian.

According to the story: “In 2014 approximately 27.7 million vehicles were scrapped, or three percent of the 907 million moving around on the roads of the world … Higher scrappage rates imply fewer [internal combustion engines (ICE)] cars on the road over time, but the trend is actually pointing the other way. The ICE isn’t melting as fast as it used to.” Cars are being built that are much more durable. Many models will now last more than 250,000 miles. As a result scrappage rates have dropped.

“Conventional cars, pickup trucks and SUVs are becoming more reliable over time – leading to longer life cycles and more resilience to scrappage … In mature economies like the US, the scrappage rate was just over 4 percent of the fleet, but it’s been declining over time. Today, it’s half of what it was in the 1970s and falling. Globally, the trend line is the same, but the rate is lower, at 3 percent. Car-owners in less wealthy countries can’t afford to swap their cars out, so they tend to keep their wheels for longer.” As well, “Academic research shows that a car-owner is less inclined to scrap their vehicle if the cost to repair it is less than its salvage value.”

As scrappage rates fall, the speed with which the total auto fleet turns over slows. EVs will take longer to become a large part of the fleet.