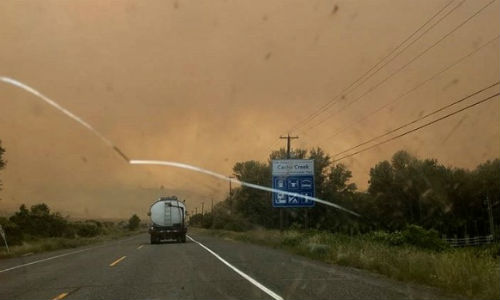 Toronto, Ontario — July 13, 2017 — In this week’s edition of Friday Fun we look into one couple’s wild ride to escape the BC forest fires, a collision shop employee convicted of embezzling more than $500,000 from the business, a dispute between collision repairers and insurers in New Zealand and much, much more!

– A 54-year-old Springfield, Illinois woman has been sentenced to more than two years in federal prison for embezzling more than $500,000 from a collision repair business in the city. A report from the State Journal-Register notes the employee was sentenced Friday, “… to two years and three months in prison and ordered to pay $505,834 in restitution.” The employee in question was the office assistant and was in charge of paying bills and balancing the company checkbook. The federal indictment accused her of using company money to pay for, “… personal debts and expenses and to fund vacations, shopping trips and major home improvements.” Yikes.

– A Vancouver couple posted a terrifying video of their escape from their summer home through the wildfires of BC this week. As the province deals with a spate of forest fires, a CBC report about the couple’s wild ride notes the fires, “… transformed a highway into a tunnel of flames and smoke.” The highway was closed when they first tried to drive out. When it reopened they decided to make a move.

– In response to the fires the BC government has announced it is, “… considering harsher punishments for careless people who start wildfires, including impounding cars for tossing cigarette butts out of the window.” The message was contained in a press release distributed this week that contained some remarkably tough wording for a government document. This is indication of the severity of the crisis.

“We must send a clear message to those that carelessly start wildfires that their behaviour will not be tolerated. Should we impound the vehicles of those who flick lit cigarette butts from their car windows? It’s often said that you can’t legislate against stupidity, but if exploring the idea of harsher penalties for careless acts means more people get the message, we must do it,” according to the release.

– An odd accident in Welland, Ontario has provincial police appealing to the owner of an “inflatable air mattress to come forward” after a fatal crash involving a motorcycle Friday night. OPP media relations officer Rob Visconti said the victim was riding with a group of other motorcyclists. “There was a vehicle travelling ahead of three motorcycles that lost an inflatable mattress, that was inflated. The first motorcycle attempted to avoid striking the air mattress and went around it.” The second motorcycle with a man and female passenger, struck the air mattress. Both were thrown from the bike. The third motorcycle attempted to avoid the already downed bike. Three people were taken to area hospitals with injuries. “We’re appealing for the owner of the inflatable to come forward and contact us, or any witnesses who may have observed the mattress fly off of the vehicle,” said Visconti, according to a report in the Welland Tribune.

– A bit of a spat has broken out between the New Zealand collision repair industry and the insurance sector, according to a report on Business Scoop. The head of the country’s Collision Repair Association (CRA) had claimed that bureaucracy is slowing down car repairs. The NZ insurance sector hit back this week when it released a press release stating that, “A panel beater skill shortage is causing delays in repairing insurance customers’ cars, not insurer red tape …” The press release went on to criticize the head of the CRA for his comments and claimed the slow repair times are a result of the industry’s, “… failure to address his industry’s skill shortages.” A report on the spat quoted the Chief Executive of the Insurance Council as saying of the head of the CRA, “Pritchard is creating tension between the smash repair industry and insurers that is unnecessary. The CRA needs to wake up to the real issues with delays in repairs. They need more skilled staff who know how to work with high tech cars and they need more staff in repair shops in the major cities where we have seen an increase in both cars on the road and crashes.”

– A recent report by the US-based Insurance Information Institute (III) examined auto repair costs and insurance premiums between 2006 and 2015. According to coverage from glassBYTEs, there was a “ … 31 percent increase in losses and expenses over the course of those ten years, while written premiums only experienced a 21-percent increase.” The reasons cited include lower gas prices, which saw more Americans driving more miles. Interestingly, “Despite the numbers of cars equipped with advanced driver assist systems (ADAS), claim frequency is up, as well as severity since autobody work for cars with ADAS technologies can be more expensive to repair.”

– Several media reports note that Tesla sales fell to “zero” in Hong Kong after an important tax break on the purchase of the cars was ended by the government. According to the Wall Street Journal, “New registrations of company’s vehicles dropped to zero from 2,939 … after authorities slashed a tax break for electric vehicles on April 1, demonstrating how sensitive the company’s performance can be to government incentive programs … Not a single newly purchased Tesla model was registered in Hong Kong in April.”

– A growing number of women in Iran are refusing to wear a hijab while driving, according to a report by The Guardian. The conservative Shia Muslim nation state has made it mandatory for women to cover their hair since the 1979 revolution. But as more women drive, “Many Iranian women are already pushing the boundaries, and observers in Tehran say women who drive with their headscarves resting on their shoulders are becoming a familiar sight.” A debate is now playing out in the country about whether a car should be considered a private space or a public space. Conservatives in the country argue that, “The invisible part of the car, such as the trunk, is a private space, but this does not apply to the visible parts of the car,” according to a quote from Hadi Sadeghi, the deputy head of Iran’s judiciary.

– Another death has been attributed to a Takata airbag. Honda announced this past Monday someone, “… using a hammer to repair a 2001 Accord parked at a home near Miami in June 2016,” died when the airbag exploded. The company said the ignition switch was in the “on” position. The fatality was the 12th in the United States linked to Takata’s airbag inflators, according to the National Highway Traffic Safety Administration.