Campbell River, British Columbia — On Oct. 24, the finalists for the Campbell River Mirror’s fifth annual Readers’ Choice Awards gathered to toast to their successes and bask in the local community’s appreciation. Among the 143 categories was an award for the community’s favourite new car dealer, as well as a title for the fan-favourite local auto service shop⁠—both of which were taken home by Steve Marshall Ford in Campbell River, B.C.

The Readers’ Choice Awards operated on an open-ended structure, meaning, rather than readers voting for previously nominated businesses, readers nominated whomever they chose in whatever category they wanted. All of the entrants were determined by the Campbell River Mirror’s readers.

According to the business, customer service is its top priority.

The facility hosts frequent community events and contests. On Oct. 25, the facility announced it would be teaming up with another local business to give away a Traeger Pro Series barbecue and all the necessary supplies.

The facility is also currently hosting a $5,000 giveaway in an effort to get its Facebook page to 15,000 likes. To enter, participants must invite their entire Facebook friends list to like Steve Marshall Ford on Facebook, then post a screenshot of their empty invited friends list under the facility’s contest post. After entering, contestants are invited to visit the shop, where they can pick up their free Steve Marshall Motors t-shirt. For more information about the contest, click here.

Steve Marshall Motors also keeps up with its online presence, posting daily content to keep connected with its customers and the local community.

Several other local auto facilities were also celebrated during the ceremony. Island Own Truck and Auto Sales was named the town’s favourite used auto dealer, while Associated Tire and Auto claimed the title of “most community-minded business”.

Lethbridge, Alberta — The staff at Big Al’s Auto Repair in Lethbridge, Alta. are exercising their charitable muscles this holiday season 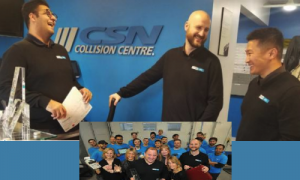 Toronto, Ontario — Oct. 2, 2019 — Just a few weeks after being featured in Collision Repair, Andrew Madai was recognized in Vancouver’s