Collision Hub says repairers should check suspension after every accident 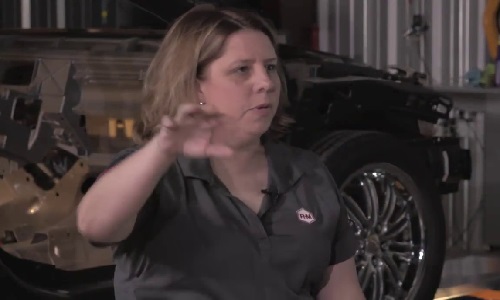 By CRM Staff
Peterborough, Ontario — February 20, 2018 — In the January edition of Repair University Live, a regular YouTube show from Collision Hub’s channel, focused on the importance of checking the suspension on a vehicle after every collision.
According to the experts featured in the video, after any collision, techs should be checking for suspension and mechanical damage as religiously as they scan and measure the vehicle. One of the experts, P&L Consultants of New York City co-owner Larry Montanez reiterated these concerns, according to Repairer Driven News, “These are three things that have to be done on every collision.”
Throughout the episode, the consultants gave examples of suspension damage that a vehicle can sustain during a collision, even if the vehicle is parked and unoccupied.
The video featured footage from a collision in New York where a parked vehicle was sideswiped by another car. The parked car was sent onto the curb and the video shows the passenger-side wheel rotating clockwise – until it stops and reverses counterclockwise.
“The transmission’s damaged in this vehicle most likely,” Montanez said. The wheel rotation indicates that the transmission system had absorbed and released the energy from the collision, even though it was parked, according to Josh McFarlin, curriculum and product development director, I-CAR.
Montanez continued to say that it may not happen right away, but eventually the impact from that collision could lead to a seized transmission.
According to Repairer Driven News, Collision Hub CEO Kristen Felder estimated that 99 percent of shops encountering a parked, unoccupied vehicle after an impact to the rear or quarter panel would assume ‘no need to worry, let’s just move on’ and continue without inspecting the suspension.
In reality, every car “is going to need a suspension and steering diagnostic and analysis,” Felder said. The suspension system is the only part of the vehicle touching the road, and “that’s where the friction is” in a collision, she continued. The chances that the suspension system will therefore be affected by a vehicle-to-vehicle impact are “very, very high.”
Most repair shops have three scenarios in mind that will trigger a suspension inspection, says Felder:  impact to the wheel assembly, visual structural damage, and a vehicle being sent off the road. According to Collision Hub, these do not accurately reflect the broad span of collision impacts which could damage the suspension in a vehicle.
Shops need to keep in mind the liability issues that failing to identify a suspension problem could bring about, but also the fact that suspension issues could result in the totalling of a car and missing this would be a lost opportunity to flag the vehicle as such from the get-go. Checking for steering and suspension issues could mean a larger initial estimate for repairers, too. “Find it early,” Danny Gredinberg, administrator, Database Enhancement Gateway said according to Repairer Driven News, as suspension damage can be the decision-making factor on whether to repair a vehicle or total it.
One indicator of suspension damage that can also trip shops up is uneven or premature tire wear. According to Felder, many shops will assume that a car without tire wear also has a properly functioning suspension system. McFarlin pointed out that tire wear only reflects past damage. If a vehicle previous has an undamaged suspension that was then damaged in a collision, which they brought to a repair shop soon after, the car would not have been on the road long enough for the damaged suspension to cause tire wear. “It’s not going to show up immediately,” said McFarlin.
The experts then discussed the importance of examining the suspension both on a rack and flat on the shop floor, as both circumstances may reveal differences.
To conclude, Gredinberg encouraged repairers to “talk to your customer” for additional information on the collision and what might have been damaged. “The story tells a lot.”
To view “Repair University Live,” visit Collision Hub’s YouTube page.