MAKING IT A BIG THING 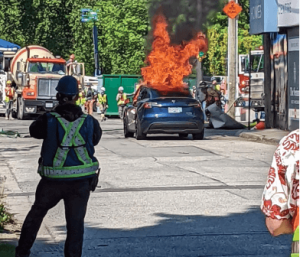 The public spectacle caused by a flaming Tesla in downtown Vancouver raised some red flags with Transport Canada, as the federal regulator’s collision and defect investigation team made an appearance on-scene as part of a newly launched probe into the vehicle.

Transport Canada dispatched their team alongside local fire services and ICBC representatives to “locate and secure the vehicle” after reports quickly circulated that a 2021 Tesla Model Y was engulfed in flames in downtown Vancouver.

Luckily, the driver managed to kick out his driver-side window and escape the inferno without injury before firefighters extinguished the fire. Unluckily (for Tesla), the investigation into this incident is far from over as Transport Canada has “notified Tesla of the incident and is currently making arrangements for a joint inspection of the vehicle in an effort to determine the cause of the fire.”

The agency’s American counterpart, the National Highway Traffic Safety Administration, told Reuters on May 26 that it “is aware of the incident and has reached out to the manufacturer for information.” 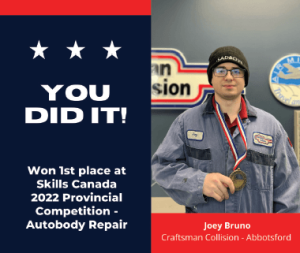 A young auto body technician student has been making waves at Skills Canada’s British Columbia provincial competition, as Okanagan College’s own Joey Bruno came away with a gold medal following Skills B.C.’s provincial event. Bruno is a Level 2 Collision Repair Technician in his third year of training at Okanagan College while also apprenticing for Craftsman Collision as part of his program.

In an interview on the college’s OCNews portal earlier in April, Bruno said his inspiration to get involved in the collision repair field stem from his dad, an autobody technician, and his uncle, an automotive painter.

“My father was in the industry for 30 years, and I have always been around vehicles. The older I got, the more love I had for automotive,” said Bruno. Bruno’s instructor, Andreas Roth, admitted the competition ahead would be tough, but said he was confident that Bruno had the skills to bring home the gold. “The competition itself is really challenging. You’re working in a fenced-off area and people are watching you work. It’s almost a spectator sport,” said Roth. “The fact you are there means you’re already a winner. But it’s a boost to your career. Employers look at you a little differently, instructors look at you differently and you look at yourself a little differently too. It’s an achievement and it builds your confidence.”

In a separate question-and-answer article with OCNews, Bruno said he has found learning the properties of metal and how different materials interact with certain welds to be one of the most helpful skills he learned early on in his program.

“There is a lot to consider with making a repair on metal (cutting applications, welding techniques, distribution of heat, etc.),” said Bruno. “I have learned that most shops expect you to know how to do metalworking as it’s a large portion of the business.”

PrevPreviousWHERE THE CASH IS AT
NextSASKATCHEWAN | REGIONAL NEWSNext