BMW conference focuses on the future 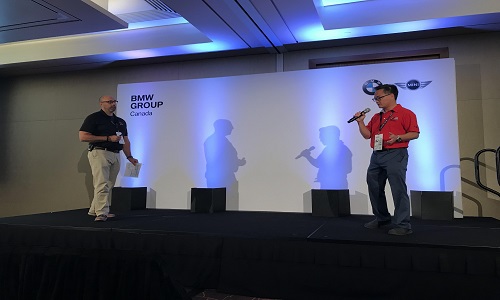 By Lindsey Cooke
Toronto, Ontario — September 25, 2018 — The future of telematics, autonomous vehicles and the partnership of certified shops with insurance companies were a few of the interesting topics of discussion during this year’s BMW conference.
The three-day event was held in Las Vegas hosted by Gary Lin, BMW Canada certified repair program specialist and Michel Matte, national manager for aftersales business development and marketing at BMW Canada.
Some of the key note speakers included Igal Mayer, CEO of Kanetix Ltd. and Jeff Wildman, key account manager OEM & industry relations at BASF.
BMW certified shops were invited, and one of which being Excellence Auto Collision in Toronto. This shop has been BMW certified for 14 years and was one of the original five In Canada.
Besides discussions of BMW’s new vehicles and audit scores, a number of discussions caught the attention of Peter Woo, of the BMW certified Excellence Auto Collision in Scarborough, Ontario.
Mayer has a number of years of experience with the insurance industry. He was the former CEO of Aviva insurance Canada and Europe. He spoke from his knowledge and perspective in which he explained that if insurance companies partner up with certified shops, it would decrease the cost with claims as well make it less time consuming.
Woo told CRM that during the presentation Mayer also went on to explain the liability issues with the trend of insurance and distracted driving. He said it’s creating a hardship because they are losing so much money in claims.
The autonomous future was another topic of discussion, where Wildman went into detail. Woo said that the interesting takeaway from his presentation was when Wildman discussed that in the dissent future people won’t have their own cars, and the market will largely be based on subscription services.
Wildman also shared that Uber and rideshare programs will reduce traffic and free up parking space, which ultimately will create more infrastructure for further urbanization.
Another futuristic theme of telematics was discussed by Lin. He explained that in the future new cars will have a feature that will let the driver know if their car has been hit. For instance, if your car was hit in a parking lot, you would get an alert to your phone.