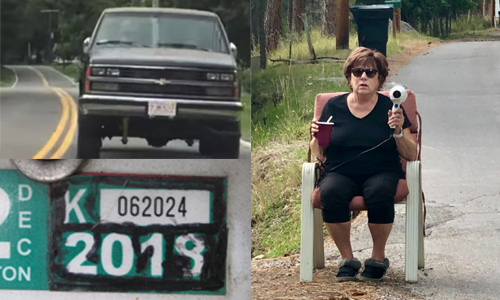 After their insurance stickers expired, a B.C. resident came up with a crafty solution in an attempt to evade authorities.

This summer, after receiving a tip from a local citizen, RCMP officers found a suspicious van parked in an undisclosed area of Port Coquitlam, B.C. When attending officers took a closer look, it became clear that something was not right with the van’s insurance.

While the licence plates were fully intact, the vehicle’s insurance stickers were drawn on with a black Sharpie marker.

“We’re used to hearing creative excuses for people trying to get out of a ticket, but I’d love to have heard this driver’s explanation,” said Cpl. Michael McLaughlin.

The driver’s creativity was not rewarded, however–his vehicle was seized and towed by authorities.

When RCMP investigated, it found several drivers were associated with the vehicle. It said, had the vehicle been stopped while in transit, the driver would have faced serious consequences.

An American man has made a local name for himself, thanks to his unique taste in pickup trucks.

At first glance, the truck appears normal. But a quick glance through a window shows that Ron’s truck is not your standard Chevy. The body of Ron’s Chevy is mounted on the chassis in reverse and the interior is flipped 180 degrees. The steering wheel, pedals, seats, dash and instrumentation have all been swapped to allow the driver to look out over the truck’s bed as he drives.

A local resident took a video of Ron’s truck and posted it to YouTube. When the backward-facing truck turns left–which it does at the end of the video–its front wheels turn from the middle of the box, while the former signal indicators act as brake lights.

Hero with a Hairdryer

Patti Forest Baumgartner of Montana, U.S. is an honorary state trooper–and she earned that title by sitting in her driveway wielding a hairdryer at passing cars.

A few months ago, Baumgartner posted pictures of herself sitting on the side of the road, waving a hairdryer at passing motorists. As a grandmother who wants a safe environment for her grandkids to visit, Baumgartner felt she had to take action against the steady stream of speeders in the area.

“The cars forget to slow down, and there are lots of people that are complaining about that,” Baumgartner told a local news outlet. “My grandkids can’t walk or ride their bikes. I wouldn’t even attempt riding mine around.”

So, Baumgartner placed a lawn chair at the end of her driveway, grabbed a beverage to sip on and pointed a hairdryer toward oncoming traffic. Her goal? That passing motorists will mistake the hair device for a radar gun and slow down.

Her interesting approach reached the office of Montana’s Highway Patrol, which sent a trooper to Baumgartner’s residence to award her an honorary trooper patrol hat and sticker badge.