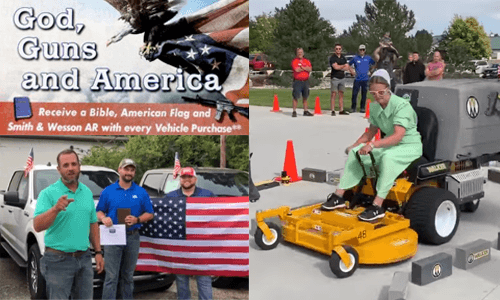 Carolina Ford in Honea Path, S.C. launched its “God, Guns and America!” promotion on Oct. 1 and plans to run it through November. The deal? Buy a new or used vehicle and receive a free bible, rifle and American flag in return.

According to the facility’s general manager Derek Hughes, October can be a “weird” month in the car business.

“It’s like the calm-before-the-storm type month,” he told a local news source. “You’ve got to have something going. October is the slowest and November is the second slowest.”

The dealership says it is not trying to make a political statement, but rather appealing to local residents’ religious leanings, patriotism and love of hunting. Customers are given a voucher and background check paperwork upon purchase and are then told to take the paperwork to a local sporting goods store. The voucher can also be used toward other items.

This is not the first time a Ford dealership has launched such a promotion⁠—a dealer in Alabama held a Fourth-of-July themed “God, Guns and Freedom” event. It also gave out bibles, American flags and shotgun-redeemable certificates for its customers.

The course, barely wider than the mower itself, forced drivers into sharp twists, turns and dead-ends. Travelling on a mower capable of speeds up to 1.5 mph (2.4 km/h), contestants also had to pick up several flags along the course, and the crown went to the person with the least penalties and fastest time. Judy, a 15-year-old from Hotchkiss, Colo. flawlessly sped through the course in just 39 seconds, shattering the record for the fastest time achieved by a woman.

It really is quite a sight to see⁠—footage of Judy’s run has nearly 80,000 views on Facebook. People are simultaneously puzzled, awestruck and envious of the teen’s skills.

Her time, although impressive, did not win her the championship. Judy snagged third place, while Glenn Miller took home championship honour with his time of 32 seconds.

Chestnuts Roasting on an Open Engine

It is now mid-October and there’s a brisk chill in the air. The leaves are changing, pumpkins are reclaiming their posts on doorsteps, and squirrels are stocking up for their winter feasts⁠—in places you might not expect.

On Oct. 7, Chris Persic received a call from his wife Holly after she started her Kia and immediately smelled something burning. The vehicle had been parked outdoors for three days and, when Chris suggested his wife take a peek under the hood, he was shocked when she found mounds of unhulled walnuts and clumps of grass littering the engine bay.

Chris spent just under an hour cleaning out the grass and around 200 walnuts before taking the vehicle to Tevis Auto Service in Pittsburgh, P.A. He shared his story to Facebook as a cautionary tale, warning locals about the mischevious animals.

“Long story short, if you park outside, do yourself a favour and check under the hood every once in a while,” he wrote. “It looked like they were storing up for the next three winters. It was absolutely nuts⁠—no pun intended.”