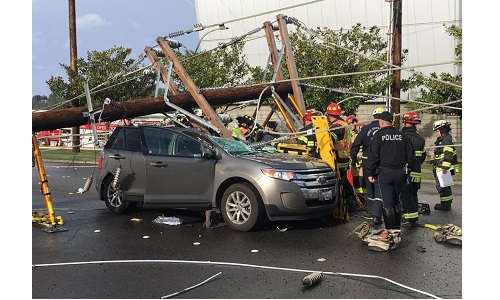 Toronto, Ontario — April 11, 2019 — From a utility pole crashing down on a vehicle, to a bear deciding to have a nice midnight snack in someone’s vehicle, vehicles have had a rough–and ridiculous–week! Here is Collision Repair’s weekly round-up of the craziest collision-related headlines from the past seven days.

Cate Siegel was about to leave for work one morning when she went out to her car and realized something wasn’t right. The whole interior of her vehicle was torn to bits. She thought maybe someone broke into it overnight. But after taking a second glance it hit her. This wasn’t a thief, but a hungry bear. The radio was pulled out and wires were dangling and the whole inside of the vehicle was completely destroyed, not to mention the surprise poop the bear left in the back seat. Siegel left a sealed package of candy in her car and suspects that is what led the bear to her vehicle. They were, after all, gummy bears.

A vehicle left propped on the edge of a fence in Windsor, Ont. has investigators and police shaking their heads. The dark-coloured sedan was discovered on Monday in the riverfront parking lot off Riverside Drive East at Glengarry Avenue. The vehicle was damaged at the front and the airbag in the passenger side had been deployed. The driver’s side of the vehicle was being held up by three busted fence posts. Police are unsure of what happened to the driver and how the vehicle ended up in such a position.

3. Wrong Place At The Wrong Time

For Tom and Linda Cook, last Friday was the luckiest day of their lives depending on how you look at it. Viral footage shows the moment a utility pole came down and crashed through a vehicle with the couple in it. The Cooks were trapped in their Ford Edge for an hour and only suffered minor injuries. The pole was one of 26 that fell last Friday in Seattle. In an interview with KOMO-TV Tom says that they are very lucky as to how the pole landed on their vehicle. “If it had hit the glass rather than the roof, it would have just come through… And the firefighters said the same thing, had it hit to the left or the right, it would have come down on one of us.”

With the price of apartments in Canada’s cities skyrocketing, more and more young people are choosing to live in basement apartments. Not only is the rent cheaper, but they often come with parking included. A Calgary man took this one step to far, however, when he drove his vehicle into his own basement bachelor pad. Unfortunately for the impractical parker, his vehicle is his car in need of some serious repairs if it hasn’t already been written-off, but his apartment building is now considered unsafe to live in. The car ended up crashing through and landing a couple of meters into his bedroom. A lot of the neighbors around the house were frightened and thought it was an earthquake.

Arachnophobia is no laughing matter–especially for a New York who was behind the wheel of her car when she noticed one of her eight-legged enemies on her seat. In a moment of panic, the woman ended up crashing her car badly enough for it to be written-off.

“We know that it is easier for some drivers than others,” police said. “But please, try to teach new drivers and yourselves to overcome the fear and pull over to a safe place.”

While the woman injured one of her legs in the crash, all eight of the spider’s are believed to have been left unscathed.