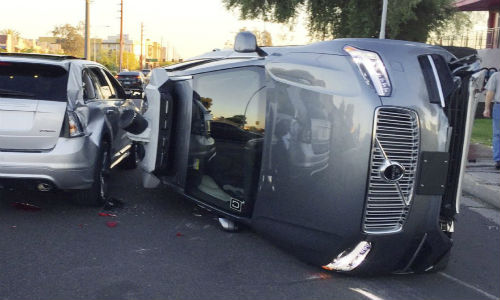 By Jeff Sanford
Toronto, Ontario — April 2, 2018 — In this week’s AV Report: The winners of the AV race begin to emerge, aftermath of the pedestrian killed by a self driving Uber and much, much more!
The burgeoning AV sector is is suddenly evolving in some very interesting ways. The recent death of a pedestrian killed by a collision with a self-driving Uber is forcing the industry to sort itself out more rapidly than it might otherwise be the case.
Uber has been forced by the government of Arizona to take its cars off the road. The state had lobbied heavily to get the Uber test program. But now government officials may be taking heat for allowing AVs on the highways of the state before the most basic safety testing had been.
As well, the New York Times published a story this past week claiming that the Uber crash came at a time when the cars were failing to live up to expectations. Uber seems to be falling back in this race.
Other companies have halted testing as well. One of those is chip-maker Nvidia, which had been known producer of chips used in video games, but is now making a big move to get in on the ground floor of the emerging AV market.
The head of Alphabet Inc’s autonomous driving unit, Waymo, popped up last Saturday to claim that his company’s technology would have safely handled the with the pedestrian.
The CEO of Waymo was appearing at the National Automobile Dealers Association (NADA) in Las Vegas when he made the comments. He said the company is well on its way to its “goal of decreasing motor vehicle fatalities.” The CEO was quoted as saying, “At Waymo, we have a lot of confidence that our technology would be able to handle a situation like that.” He was referring to the pedestrian, crossing a street at night, that was killed by the Uber vehicle.
Waymo also announced this past week a new alliance that will see it vastly expand its effort to create a driverless ride service over the next two years. According to several reports the company said it plans to buy up to 20,000 electric cars from Jaguar Land Rover and outfit them with the radars, cameras and sensors that Waymo has developed.
According to a press release from Waymo, “The cars will be used in a ride-hailing service that Waymo plans start in Phoenix by the end of this year and then roll out in other cities across the United States.” The company said it hopes to eventually provide a million rides a day.
Waymo now has five million miles of testing with its cars and is considered to be out in front of the race to bring a self-driving car to market.
Waymo is also getting ready to roll out a self-driving ride share service in Arizona this year.
GM claims it will have its AV ride share service ready to go by the end of next year.
Interestingly enough, as all this is going on, a bill being considered in Washington would see, “People who get badly injured while riding in self-driving cars may one day be prohibited from filing a lawsuit against the manufacturer, should legislation under consideration in the Senate get passed…” The bill would require such disputes to be settled through arbitration.
According to a media report, “Critics of the bill, dubbed the AV Start Act, believe it will have enormous effects on the way autonomous vehicles are viewed in the public, since claims would be settled behind closed doors, if approved.””
According to the story, “If the pending legislation gets pushed through and passed, people who get injured while riding in a self-driving car would not only be barred from suing the manufacturer, but the maker of the technology, as well.” http://nyp.st/2IC1Cvg, https://bit.ly/2pI1n9s, https://nyti.ms/2E39RNK, https://nyti.ms/2E39RNK