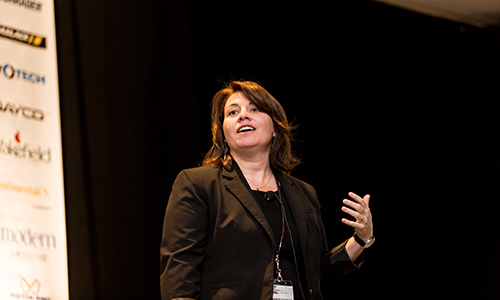 Windsor, Ontario — August 4, 2016 — The face of the collision repair industry may have made a change for the better on July 15, after AIA Canada finally released its highly anticipated AWAKE report to the public.

Well over two years in the making, the Advancing Women in Automotive Knowledge Exchange (AWAKE) needs-assessment report takes an in-depth look at the experiences of women working in the automotive industry and makes several recommendations on how best to tackle some of the outdated prejudices still lingering in the business from years gone by.

Unveiled at a special news conference at St. Clair College in Windsor, Ontario, the 32-page document will act as a platform to both encourage and initiate positive changes in the industry moving forward, that according to France Daviault, senior director of industry relations for AIA and one of the leaders behind the project.

“This is something the AIA has been working on for quite a while now,” Daviault told Collision Repair magazine. “We’ve been hearing through the grapevine and through word of mouth that there has been certain barriers in place for women working in the automotive industry.”

She added, “Traditionally, this is an industry dominated by men, so we wanted to take stock of some of these thoughts and some of these experiences and give them a bit of a voice. Of course, most of the experiences were largely positive, but there were some that were a little concerning – those are the ones that need to be addressed.

Funded by the federal government, the report was commissioned by the AIA and conducted by St. Clair College researcher Nour Hachem last fall. Hachem surveyed company owners and a multitude of individuals holding a variety of industry-related positions from across the country, while also holding seven focus groups for women in the business.

The report itself highlighted four key recommendations to address the underrepresentation of women involved in the aftermarket industry – developing more inclusive workplace cultures, implementing pro-active support measures for women employees, investing in measures to enhance public awareness of job opportunities for women in the industry and continuing to support training and incentive programs to raise interest in the business.

While admitting the report may come across as harsh, Daviault is keen to point out that it is in no way an attack on the industry, instead choosing to think of it as an opportunity to make the business bigger and better moving forward.

“The great thing about a project like this is that once it’s documented, once it’s brought to light, you have to move forward. There’s no beating around the bush anymore,” Daviault said. “The way we see it, for our industry to prosper, for the sustainability of the aftermarket business, with our current labour issues, it makes good business sense to bring more women into the industry.”

According to AIA, the aftermarket industry currently employs just over 403,000 people, with less than seven percent of those being women.

Moving forward, Daviault said she was excited to start working on two brand new projects that have risen up as a direct result of the report – the development of a mentorship program and the creation of a new online portal designed to give individuals access to a wealth of information at one central location.

The mentorship program, according to Daviault, will be developed and facilitated by professionals within the business and will serve to provide those with an interest in the industry with a platform in which to learn. The online portal, Daviault says, was a direct request from the women that participated in the report who wanted a place to connect with their peers nationwide.

“Regarding the mentorship program, we’re really looking at building something that is going to last over a long period of time. We’ve given ourselves a year to develop the structure for a really robust program. Our hope is that eventually this program, that will be initially modeled for women, can be used by the entire industry,” Daviault said.

She mentioned that although the AIA has had a “fantastic response” from potential volunteers looking to get involved in the development of project, there was still room for a few more to jump on board.

“We have a lot of educators that have volunteered their time to help develop this program, what we’re looking for now are industry people to get involved,” Daviault said. “We want to bring as many people on board as possible. The more experts we have providing their guidance and their input, the better this program is going to be for everyone.”

Daviault said the AIA aims to have both the mentorship program and online portal ready to go at some point next year.