A Farewell and a New Hello: Changes to ARC’s board of directors

After a long and storied involvement with the national association Neil James is stepping down from the Automotive Recyclers of Canada (ARC) Board of Directors, the organization announced August 17.

In 1993, Neil attended his first Ontario meeting of the Canadian Auto Recyclers. At that time, the group was made up of several like-minded recyclers, all bonded together with the Hotline voice system to buy and sell parts. Neil thought the name failed to express the responsibility of the organization and challenged the auto recyclers to create a new national voice for all auto recyclers.

Neil was involved with many meetings between Canada and the United States—the U.S.-based Automotive Recyclers Association was one of the first groups to recognize and support the ARC.

Neil was on the original ARC Board and was a regular and vocal participant, serving as Board Chair on two different occasions.

Over 25 years ago Neil was also the Chair of the B-CAR Division of the ARA and was frustrated that no municipal or provincial official could explain the regulatory requirements for processing an end-of-life vehicle. B-CAR took this issue to Environment Canada and the BC Ministry of Environment, and the first Environmental Code of Practice (CoP) was developed.

“Neil James has been a visionary for the auto recycling industry, and his time, energy and knowledge commitments to his national association have made for a better industry for everyone,” said Steve Fletcher, Managing Director, Automotive Recyclers of Canada (ARC).

Ken currently serves as the Senior Advisor to the Automotive Retailers Association (ARA). He has had over 10 years of progressive employment with the ARA, joining originally as the Divisional Coordinator for the BC Auto Recyclers (BCAR)—a position he has kept to this day. Ken also represents other ARA divisions such as towing and recovery, licensed motor dealers and the mechanical repair division.

Ken’s affiliation with the ARA goes back to its roots. Ken is a third-generation ARA member. His grandfather Ed Meyers, a Ford Dealer on Vancouver Island, was one of the founding members in the early 1950s. His father Ed Hendricks served as ARA President from 1994-1998 and as Chairman from 2011-2015.

Ken has spearheaded and managed many industry development projects including the development of a training and recycling certification program for the auto recycling and towing industries and he has also managed several WorkSafeBC sponsored projects focused on providing occupational health and safety resources and developing guidelines for the automotive industry. 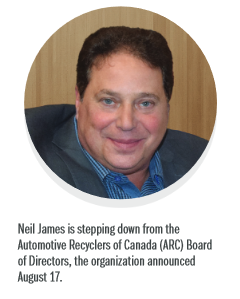 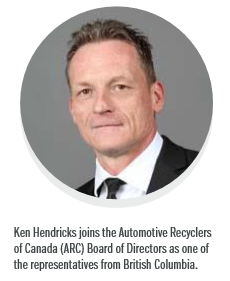