Ready, Set, Autonomy Despite the beliefs of many, it appears that Canada could be among the first countries to see automated vehicles on the roads. According to the KPMG Autonomous Vehicles Readiness Index, Canada is currently ranked seventh among 20 countries in terms of readiness⁠—even describing Southern Ontario as “a perfect ecosystem to support researching […]

Mississauga, Ontario — On Thursday, aftermarket grandees from around Ontario arrived in Mississagua for the grand opening of its new parts distribution centre. Located at 6085 Belgrave Road in Mississauga, Ont., the 16,000 sq m location will service businesses across Canada. Its overland and airborne deliveries will be filled by two shifts of workers. “With […]

Las Vegas, Nevada ⁠— On Thursday, Uni-Select CEO Brent Windom addressed crowds at AAPEX to announce a new national banner program⁠—Bumper to Bumper Auto Service⁠—launching next year. The company has operated its Bumper to Bumper⁠—Canada’s Parts People for auto parts wholesalers since 2006. The new program, catering to repair facilities, will be designed to promote […]

Toronto, Ontario — Collision repair facilities and auto insurers have a delicate—sometimes fractious—relationship.  Unfortunately for the brave men and women of Canada’s repair sector, the balance of power is rarely on the repairer side of the equation. Last year, Collision Repair turned the tables on auto insurers. It issued a survey to Canadian auto repair […]

Las Vegas, Nevada — “Every single vehicle, every single make, every single model,” is the sentiment passed from Mike Anderson regarding his views on researching OEM guidelines for cure times and painting around ADAS sensors. Anderson, an expert consultant at Collision Advice, shared his findings during his presentation, “OEM Procedures form a Refinish Perspective,” from […] 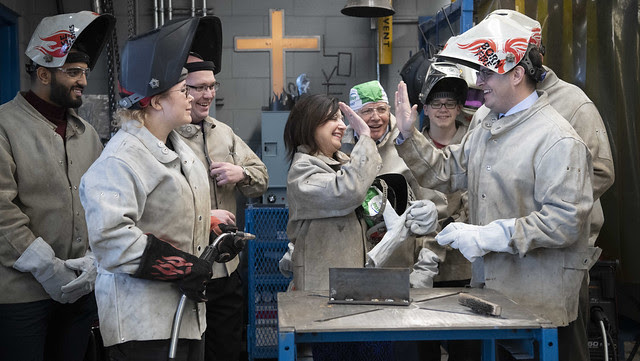 Edmonton, Alberta — On Thursday, the province of Alberta announced it will be increasing skilled trades funding, enabling more youth to pursue and learn about careers in the trades and showcase their talents on a national stage. Over the next four years, Skills Canada Alberta funding will be increased to $8 million. The increased investment, […]